You are here: Home / Archives for Weil 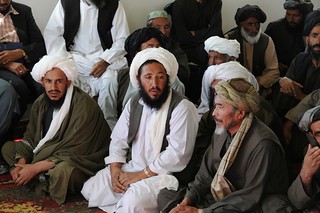 It is difficult to believe that over a decade has passed since the 9/11 attacks, in which nearly 3,000 innocent people died in four coordinated suicide attacks perpetrated by al-Qaeda. The United States reacted by invading Afghanistan and declaring war against the Taliban, an extremist Islamic terrorist movement, which had harbored al-Qaeda.

One of the more extraordinary aspects of the attacks is the connection with Israel. In 2004, al-Qaeda’s leader Osama bin Laden blamed the United States’ support of Israel as one of the causes for the movement’s terrorism. However, the fact that the majority of the Taliban, who make up the backbone of al-Qaeda, themselves claim Israelite origin, is relatively unknown.

More after the jump.
The Taliban operate in Afghanistan and northwestern Pakistan. They are fundamentalist Sunni Muslims, who wish to impose their brand of Islam and their interpretation of Sharia law on others. They despise western democracy and secularism, are notorious for their treatment of women and ferociously oppose the US and Israel.

The Taliban are largely made up of members of the Pashtun or Pathan tribes, who constitute the largest single tribal grouping in the world, numbering over 15 million. They are divided into distinct local tribes reminiscent of the names of the Lost Ten Tribes of Israel. According to the Bible, the Ten Lost Tribes were taken captive by the Assyrians in the eighth century BCE, while the inhabitants of the kingdom of Judah remained in Israel. The Ten Tribes were exiled to “Halah, Habor, the cities of Medes and the River Gozan”, in the very geographical and cultural area in which the Pashtuns live. The fate of the Lost Israelites has always been something of an enigma, and discussed throughout the ages in the Talmud and other Jewish texts, but Jews and Christians alike have generally believed that at the “end of days”, they would eventually be reunited with the descendants of the tribe of Judah.

The second president of Israel, Itzchak Ben-Zvi, in his book, The Exiled and the Redeemed, devoted a whole chapter to the purported Israelite origins of the Pashtuns. He explained that the Pashtun tribe Rabbani could be the lost Israelite tribe of Reuben; Shinwari could be Shimon; Daftani could be a corruption of Naftali; Jajani – Gad, Afridi – Ephraim, and so on. He quoted local Jews from Afghanistan who had reported to him in the early 1950s that these fierce tribesmen wore an embroidered Hanukka lamp on their backs. He had heard that they wrapped themselves in a tallith, and lit candles on Friday night. They also wore, and to this day, insist on keeping their pe’ot (sidecurls). Abraham Benjamin, a Jew from Herat in Afghanistan, reported that “According to the tradition current among the Afridis, they are descendants of the Israelites, more particularly, the sons of Ephraim.”

In a recent email from a member of the Pashtun tribes, the enquirer (anonymous for obvious reasons) wrote: “I have always been curious about my ancestry… I was told very early on in my life that we are like the Jews and that our customs and rituals are the same… I would be amazed to find out whether there is a gene link in my ancestry to Israel”.

The Pashtun, even if they are virulently anti-Zionist, accede that they are the “sons of Israel”. When I interviewed members of the Yusuf-Zai (sons of Joseph) tribe years ago in the orchards of Kashmir, they related their origins with pride. Even today, many Pashtun agree that they are Israelites, even if they generally disassociate themselves with the modern state of Israel.

According to Pashtun tradition, King Saul bore a son by the name of Jeremy, whose birth is not recorded in Jewish texts. Jeremy fathered a royal prince called Afghana, whose descendants fled to Jat in Afghanistan. In 662 CE the descendants of Afghana were converted to Islam at the explicit request of Mohammed. The mission was accomplished by his emissary Khalid ibn al-Walid, who returned to his master with “proof” of his activities — 76 converts and seven leaders of the “Children of Israel”, including a descendant of Afghana named Kish. Kish subsequently changed his name to Ibn Rashid, and he was entrusted by Mohammed with the task of spreading the Islamic word. Many of today’s Taliban terrorists claim descent from Ibn Rashid.

Many Afghan and western scholars alike have made detailed investigations into the subject from historical, anthropological and philological points of view, and provided “proofs” of the Israelite origins of the Pashtun. Some write that they “look” Jewish. They have sallow skins and dark hair and eyes, are of medium stature, wear beards and sidecurls and have a typically “Jewish” profile. Others claim that they also observe Israelite/Jewish practices. They perform circumcision on their boys near the eighth day; the women observe purification laws prescribed in the Torah; and they wear amulets, which some people claim contain the words of the Shema — “Hear O Israel, O Israel, the Lord is our God, the Lord is One.”

For some, the Pashtuns’ ancient code of hospitality, known as Pukhtunwali, by which generosity (khegara) and protection of guests are paramount, is sufficient proof that they are affiliated with Israelites and hence Jews. This code lays down the guiding principles behind the Pashtuns’ refusal to give up bin Laden, who sought sanctuary in Pakistan, until he was eventually shot down by U.S. gunmen in May 2011. Similarly, al-Qaeda’s second-in-command, Atiyah Abd al-Rahman, killed by U.S. forces on 22 August 2011, had sought refuge and was operating out of traditional Pashtun territory in north Waziristan in Pakistan.

Like the ancient Israelites, revenge (badal) is one of the driving forces of Pashtun society. If attacked, or pride wounded, the Pashtun, who make up the rank and file of the Taliban, will partake in a jihad (holy war) against the invaders. They succeeded with the British in the 19 th century. They repulsed the Communists; and they are still resisting the American coalition.

The older generation of Pashtun did not hide the fact of their Israelite descent, but recently some (though certainly not all) of the younger generation have suppressed this fact, which could render them highly unpopular in the present political constellation.

Dr Shalva Weil is a Hebrew University anthropologist and a specialist on the Ten Lost Tribes of Israel.

This article was reprinted with permission from ISN.

Leaders across the political and religious spectrum celebrate Tu B’shvat by setting goal to reduce greenhouse gas emissions 14% by 2014.

The Coalition on the Environment and Jewish Life (COEJL) today announced that a diverse group of community leaders has joined its Jewish Energy Covenant Campaign by signing the “Jewish Environment and Energy Imperative” declaration. Rabbis from the Conservative, Orthodox, Reconstructionist, Reform and Renewal movements and other communal leaders set the goal of significantly lowering greenhouse-gas emissions, advocating for energy independence and security, and reducing the Jewish community’s energy consumption 14% by 2014.  The official signing ceremony at Manhattan’s 14th Street Y preceded Tu B’Shvat, the Jewish new year for trees.

The need to transform the world’s energy economy while addressing global climate change is not only a religious and moral imperative, it is a strategy for security and survival.

Each of us — as Jews, people of faith and Americans — has a personal responsibility to work toward lowering greenhouse-gas emissions and decreasing our dependence on fossil fuels,” said Rabbi Steve Gutow, COEJL co-chair, and president and CEO of the Jewish Council for Public Affairs. “This responsibility starts in our hearts and from there we must care for our homes, places of worship and institutional buildings.

The Jewish Energy Covenant Campaign commits our leadership to take concrete action on climate change and energy security. Reducing our energy use by 14% by 2014 is our first step toward the national goal of an 83% reduction of 2005 greenhouse gas levels by 2050.

The year 2014 is the next ‘sabbatical’ or seventh year in the Jewish calendar, a traditional time to refrain from impacting the earth.

“Greening and sustainability are areas where the Jewish community has both an opportunity and an obligation to take a leadership role in the neighborhoods where Jewish institutions thrive,” said Stephen Hazan Arnoff, 14th Street Y executive director.

Since participating in the Jewish Greening Fellowship program, the Y has reduced energy usage with new systems and equipment, and adopted sustainable practices to reduce and reuse materials, especially in the Y’s theater, where the ceremony took place.

Among the 50 signers of the declaration are:

About COEJL
The Coalition on the Environment and Jewish Life deepens and broadens the Jewish community’s commitment to the stewardship and protection of the earth.  Through a network of 27 national organizations and 125 community agencies, COEJL is mobilizing the Jewish community to address today’s energy and climate change crisis. COEJL is an initiative of the Jewish Council for Public Affairs.

About the 14th Street Y
The 14th Street Y builds community in the heart of Manhattan’s East Village.  The Jewish center embraces people of all ages, faiths and backgrounds, offering health and fitness, education, art and recreational programs for people and families of all ages. The 14th Street Y is part of a network of 44 programs at 27 sites provided by The Educational Alliance.