You are here: Home / Archives for Saudia Arabia 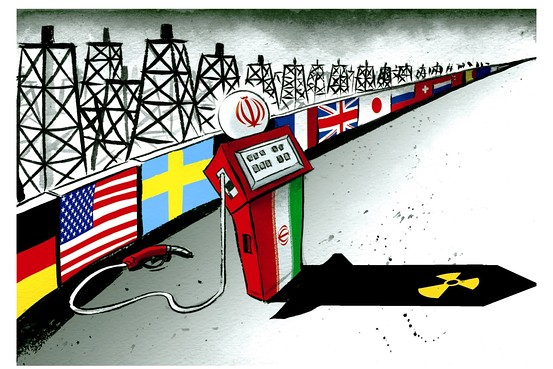 It has been several weeks since President Barack Obama first increased sanctions on Iran, effectively cutting off Iran’s central bank from the global economy. To this point, the evidence is overwhelming that these sanctions have had a strong effect on Iran’s economy and government.

Previously a major importer of steel, Iranian steel traders have found their business “grinding to a halt.”

More after the jump.
According to Reuters:

Iranian buyers cannot obtain dollars or euros, forcing them to offer letters of credit in alternative currencies such as the Indian rupee, Korean won and Russian rubles.

Most steel traders, wary of currency risk and taxation issues, are not willing to accept this form of payment.

‘Now you can really feel the effects of the sanctions imposed by the U.S. and Europe…It is very difficult to do any business with Iran at the moment,’ a steel trader at a Swiss metals trading house said.

Iran could be forced to place unsold barrels into floating storage or even shut in production in the second half of this year, the IEA said on Friday in its monthly Oil Market Report.

‘International sanctions targeting Iran’s existing oil exports do not come into effect until July 1, but they are already having an impact on crude trade flows in Europe, Asia and the Middle East,’ it said.

‘Although there are five months before restrictions on existing contracts take effect, European customers have already curtailed imports of Iranian crude and Asian buyers are lining up alternative sources of supply,’ the IEA said, adding that European customers were likely to look to Russia, Iraq and Saudi Arabia for replacement barrels.

Bloomberg added that owners of over 100 supertankers have now said they will stop loading oil supplies from Iran.

In an interview with Haaretz, Dennis Ross, Obama’s former Middle East advisor, stated that ‘The fact is [Iran’s] currency has devalued by half in the last six weeks… I’d say sanctions are working, if that’s the case.’ Haaretz wrote:

These sanctions, Ross said, are the crippling sanctions Israel has called for, and can affect Iran’s behavior. When the Iranians feel they are under sufficient pressure, they look for a way to reduce it, Ross said, and right now they are under pressure they have not been under before. ‘It’s not an accident that suddenly they want to meet with the P5 +1,’ Ross said, referring to the forum of five permanent members of the U.N. Security Council plus Germany.

Ross also stated his belief that sanctions are forcing Iran to the negotiating table in an op-ed in The New York Times. Ross wrote:

Iran cannot do business with or obtain credit from any reputable international bank, nor can it easily insure its ships or find energy investors. According to Iran’s oil ministry, the energy sector needs more than $100 billion in investments to revitalize its aging infrastructure; it now faces a severe shortfall.

New American penalties on Iran’s central bank and those doing business with it have helped trigger an enormous currency devaluation. In the last six weeks, the Iranian rial has declined dramatically against the dollar, adding to the economic woes Iran is now confronting…

Now, with Iran feeling the pressure, its leaders suddenly seem prepared to talk. Of course, Iran’s government might try to draw out talks while pursuing their nuclear program. But if that is their strategy, they will face even more onerous pressures, when a planned European boycott of their oil begins on July 1.

As sanctions continue to take effect, international pressure will only continue to increase against Iran’s nuclear program.

Haaretz’s Chemi Shalev forcefully pushed back at Republicans attacking President Barack Obama’s strong record of support for Israel by shining a light on the many flaws found in the heavily blemished Israel record of President Ronald Reagan-a hero to nearly all modern Republicans. Shalev contrasted Obama’s unprecedentedly high levels of security assistance to Israel and his record of consistently supporting the Jewish state at the United Nations with Reagan’s lack of support for Israel in UN bodies and his decision to arm Saudi Arabia with “game-changing sophisticated weaponry.” Shalev also noted Reagan’s multiple open and serious conflicts with Israeli leaders along with his insensitivity towards the Holocaust.

Shalev summed up in his headline, “If Obama Treated Israel Like Reagan Did, He’d Be Impeached.”
Click here to learn why.