You are here: Home / Archives for off broadway

“It’s all about self-reliance and not depending on anyone else,” said playwright Bobby Goldman, of her new Off-Broadway musical comedy, Curvy Widow, now playing at the Westside Theatre in New York City. An autobiographical memoir adapted for the stage by Goldman, “Curvy Widow” is an 85-minute show that peeks inside the life of a new widow as she throws herself into the internet dating scene. It is a raw and honest portrait of a feisty woman who has to reinvent herself after the loss of her husband of 30 years. END_OF_DOCUMENT_TOKEN_TO_BE_REPLACED 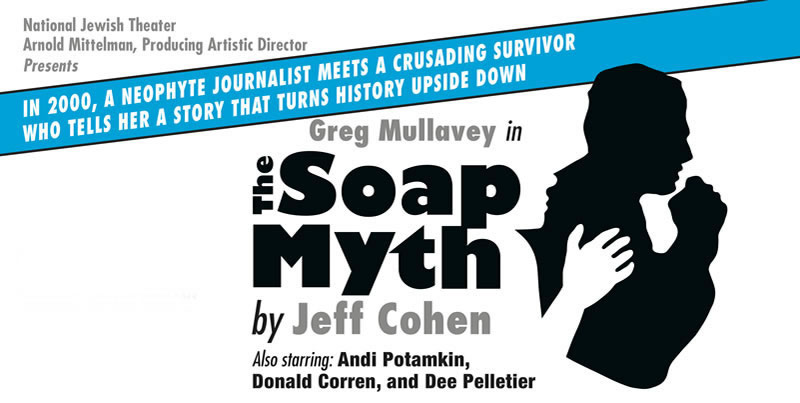 Although I saw it over 48 hours ago, The Soap Myth,  playing in New York City at the Black Box Theatre, through April 22, continues to haunt me. This is the theatre of witness at its best – provocative and  morally ambiguous that raises more questions than it answers.  Playwright Jeff Cohen and director of the National Jewish Theatre, Arnold Mittelman’s The Soap Myth explores the claim that the Nazis made soap out of Jewish bodies.

Greg Mullavey is brilliant in the role of Milton Saltzman, a Holocaust survivor who bears personal witness to the production of the alleged soap.    The play explores the “inherent conflict between the eyewitness survivor memories and the evidentiary standards demanded by scholars.”  It explores too what role, if any, Holocaust deniers play in this issue.   To what extent ought the Holocaust deniers, who figure prominently in the play, affect Jewish museum exhibits?  More than you would like to think.

“All history is speculative” says Annie Blumberg, the young journalist (played admirably by Andi Potamkin) reporting on the soap myth for a magazine.   The denier, played brilliantly by Dee Pelletier (who also plays the museum director) gives a disturbing lecture, based on actual facts, delivered to a university audience, where she casts doubt on the number of victims who perished during the Shoah. “Must the Jews be greedy even in this” — referring to her claim that Jews have egregiously exaggerated the number of victims who died.

In exploring the politics of memory, The Soap Myth asks uncomfortable questions about what constitutes enough evidence to make it into a museum exhibit. When the museum gatekeepers reject Milton’s repeated requests to include the soap in their exhibit, they are effectively denying this survivor’s testimony as purely anecdotal. The dramatic struggle of The Soap Myth is Milton’s attempt to get somebody to listen to his painful story.

The Soap Myth is presented as part of the National Jewish Theatre Foundation and Holocaust Archive initiative, directed by Arnold Mittelman.  Mittelman is the Former Producing Artistic Director for over two decades of the Coconut Grove Playhouse in Florida.  Mittelman founded the National Jewish Theatre in 2007.   Its mission is to celebrate the “genius, creativity and history of the Jewish people.”   NJT produced the Soul of Gershwin, the Musical Journey of an American Calmer, Sholom Alechem: Laughter Through Tears with Theodore Bikel as author and actor.  Future plans of the NJT include plays and musicals such as: The Rothschilds, Joseph Vass’ Words By, Mark Saltzman’s Rocket City Alabam and Hannah by John Wooten.

NJT’s latest initiative is to create the first comprehensive research and production oriented around the Holocaust Theatre Archive. According to Mittelman, the NJT is filling an unfortunate void that has occurred by the loss of many professional resident English-speaking Jewish theatres, in major cities, including New York.

It is worth a ride to NYC to see this provocative, haunting play which will have you thinking about the nature of memory and how a survivor survives these memories for a long time.   The Soap Myth is not to be missed.

The Soap Myth: Black Box Theatre at the Harold and Miriam Steinberg Center for Theatre in NYC. Click here for tickets.