You are here: Home / Archives for Napolitano 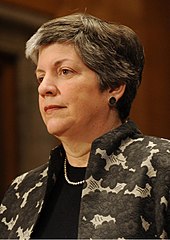 President Barack Obama met this morning with Philadelphia Police Commissioner Charles Ramsey and a dozen of his fellow police chiefs and sheriffs:

Obama spoke for roughly three minutes about the importance of hearing from law enforcement leaders on the issue of gun violence and what communities across the country need from the federal government in order to curb the number of mass shootings throughout the the country.

Mr. Obama thanked the police chiefs and sheriffs for coming to the White House today and recalled the executive actions he took earlier this month, as well as his legislative goals, and called on Congress to work with the administration to pass them.

Vice President Biden and I just want to thank the police chiefs and sheriffs who are here today representing law enforcement officials all across the country who obviously share our deep concern about issues of gun safety and how we can protect our communities and keep our kids safe.

A couple of weeks ago, I appeared along with Joe to present the administration’s ideas in terms of steps that we have to take. And I issued a number of executive actions that should be taken unilaterally in order to improve our collection of data to make sure that we’re coordinating more effectively with state and local governments, and to do everything that we could to improve the issue of gun safety and to make our communities safer.

But, as we’ve indicated before, the only way that we’re going to be able to do everything that needs to be done is with the cooperation of Congress. And that means passing serious laws that restrict the access and availability of assault weapons and magazine clips that aren’t necessary for hunters and sportsmen and those responsible gun owners who are out there. It means that we are serious about universal background checks. It means that we take seriously issues mental health and school safety.

We recognize that this is an issue that elicits a lot of passion all across the country. And Joe and my Cabinet members who have been involved in this have been on a listening session over the last several months. No group is more important for us to listen to than our law enforcement officials. They are where the rubber hits the road.

And so I welcome this opportunity to work with them; to hear their views in terms of what will make the biggest difference to prevent something like Newtown or Oak Creek from happening again. But many of them also recognize that it’s not only the high-profile mass shootings that are of concern here, it’s also what happens on a day-in-day-out basis in places like Chicago or Philadelphia, where young people are victims of gun violence every single day. That’s why part of the conversation that we’re going to be having today relates not only to the issue of new laws or better enforcement of our gun laws, it also means what are we doing to make sure that we’ve got the strongest possible law enforcement teams on the ground? What are we doing to hire more cops? What are we doing to make sure that they’re getting the training that they need? What are we doing to make sure our sheriff’s offices in rural counties have access to some of the resources that some of the big cities do in order to deal with some of these emergencies?

So I’m looking forward to a robust conversation. I know that this is not a shy group, mainly because they’re dealing with life-and-death situations every single day. But I’m very grateful to them for their participation. This is a representative group. It comes from a wide cross-section of communities across the country. And hopefully, if law enforcement officials who are dealing with this stuff every single day can come to some basic consensus in terms of steps that we need to take, Congress is going to be paying attention to them and we’ll be able to make progress.

Secretary of Homeland Security Janet Napolitano visited Israel this week for a number of strategic talks with high-level Israeli officials.

The Department of Homeland Security (DHS) said in a press release recapping the first day of her trip:

Secretary of Homeland Security Janet Napolitano … traveled to Jerusalem where she met with Israeli President Shimon Peres and other Israeli officials to discuss security-related issues, and signed a Joint Statement on the implementation of the Global Entry trusted traveler program for Israeli citizens with Foreign Minister Avigdor Lieberman.

‘This agreement is part of the United States’ strong and enduring partnership with Israel, dedicated to ensuring the safety and security of both our countries,’ said Secretary Napolitano. ‘Global Entry will expedite the customs and security process for trusted Israeli air travelers arriving in the United States, while maintaining the highest standards of security.’

Recap of the second day of the trip after the jump.
DHS said in a press release summarizing her second day in Israel:

Secretary of Homeland Security Janet Napolitano … concluded her visit to Israel, delivering remarks on the Department’s collaboration with international partners to combat terrorism and facilitate trade and travel at the International Institute for Counter-Terrorism, and meeting with Israeli Prime Minister Benjamin Netanyahu and other Israeli officials to discuss security-related issues.

‘The United States remains steadfastly committed to Israel’s security.  The bonds between our two nations are unshakeable, lasting and critical to both our peoples,’ said Secretary Napolitano.

During her remarks, Secretary Napolitano underscored the importance of partnering with Israel to address shared challenges – from preventing terrorism to securing the global supply chain to preparing for and recovering from natural disasters….

Secretary of Homeland Security Janet Napolitano today met with Jewish community leaders from across the nation at the White House to underscore the Department of Homeland Security’s (DHS) commitment to partnering with faith-based communities to prevent, prepare for and respond to threats and announce the expansion of DHS’ “If You See Something, Say Something™” public awareness campaign to the Jewish Federations of North America (JFNA) and Security Community Network (SCN).

More after the jump.
“Homeland security begins with hometown security, and our nation’s faith-based organizations play a critical role in keeping our communities safe,” said Secretary Napolitano. “Expanding the ‘If You See Something, Say Something™’ campaign to national Jewish groups, the first faith-based partnership for the campaign, is an important step in the Department’s ongoing effort to engage the American public in our nation’s security efforts.”
In the meeting, Secretary Napolitano joined White House Office of Public Engagement Director John Carson to highlight the vital role of faith-based leadership in providing guidance and assistance to their organizations and institutions regarding ways to protect against terrorism and other threats. The launch of the “If You See Something, Say Something™” campaign partnership with the Jewish Federations of North America and SCN will feature print and social media materials distributed to the thousands of centers and organizations that the associations reach.

“The American Jewish community and the places we gather are, unfortunately, often targets for terrorists,” said Jerry Silverman, President and CEO of The Jewish Federations of North America. “This new partnership with the Department of Homeland Security will empower us to counter this threat as we become more actively involved in our own protection.”

Secretary Napolitano also highlighted the Department’s continued efforts to strengthen collaboration with members of the Jewish community through platforms such as SCN-a mechanism for information sharing with faith- and community-based organizations designed to quickly improve overall security awareness in a crisis situation-and discussed ways to expand and enhance current initiatives and partnerships.

The “If You See Something, Say Something™” campaign-originally implemented by New York City’s Metropolitan Transportation Authority and now licensed to DHS for a nationwide campaign-is a simple and effective program to engage the public and key frontline employees to identify and report indicators of terrorism, crime and other threats to the proper transportation and law enforcement authorities.

Partnerships with the “If You See Something, Say Something ™” campaign have recently been launched with the Indianapolis 500, Washington State Ferries, the City of Los Angeles, AEG Worldwide, Massachusetts Bay Transportation Authority, the National Collegiate Athletic Association (NCAA), the National Basketball Association (NBA) and the National Football League (NFL), as well as in Colorado, Minnesota and New Jersey, more than 9,000 federal buildings nationwide, Walmart, Mall of America, the American Hotel & Lodging Association, Amtrak, the Washington Metropolitan Area Transit Authority, the general aviation industry, and state and local fusion centers across the country. Secretary Napolitano also previously released an “If You See Something, Say Something ™” public awareness video, available here.

In the coming months, DHS will continue to expand the “If You See Something, Say Something ™” campaign nationally to help America’s business, communities and citizens remain vigilant and play an active role in keeping the country safe.