You are here: Home / Archives for Lobbying

We will be lobbying, protesting and performing pragmatic and creative nonviolence at the Capitol. The goal is to have our bills on banning gifts to legislators, ending gerrymandering and establishing automatic voter registration (AVR) moved out of committee and onto the floor for a successful vote.

One hundred and five miles in nine days—that is the feat just accomplished by March on Harrisburg’s participants, who marched from Philadelphia to the State Capital in Harrisburg, May 13-21. But the activists do not have time to rest their feet, as they start a four-day lobby and protest at the State Capital, May 22-24.

END_OF_DOCUMENT_TOKEN_TO_BE_REPLACED

Join the organization March on Harrisburg as we march from Philadelphia to Harrisburg to fight for democracy by encouraging our legislators to pass laws ending gerrymandering, establishing automatic voter registration (AVR) and banning gifts to legislators.

Along the march, we will hold rallies, teach-ins, nonviolence trainings and canvassing and phone banking sessions. You are welcome to be part of the entire march or to join us on any leg of the journey. Housing and other logistical support are being arranged.

Register for the event here.

Here are the routes for the first days of the march:

Register here, and a volunteer organizer will contact you. You can also sign up for one of our weekly training sessions in advance of the Citizens Lobbying Day. Sessions are held on Wednesdays from 8:00-9:00 pm and on Fridays from 12:00-1:00 pm.

Register here, and a volunteer organizer will contact you.

Josh Harrison at Mother Jones, recently reported on BP’s Secret Ticket Request Line. For the past decade until last week, politicians and regulators could call (916) 444-7968, identify themselves as a lawmaker and receive free tickets to the BP suite at Arco Arena  for Kings basketball games, concerts and other exclusive events. Click for audio.

Perhaps such gifts are currently legal, but we should not tolerate them.

In Exodus we learn that officials should “take no gift, for the gift blinds the wise, and perverts the words of the righteous”. Just as surely as bribes corrupt a judge, gifts — legal or not — corrupt politicians, researchers and regulators.

Fortunately, some institutions are setting a higher standard. 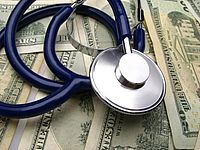 Harvard Medical School is jumping on the gift band bandwagon with a sweeping policy to regulate contact by its 11,000 faculty members with the medical device and pharmaceutical industries.

The school’s new policy, slated to go into effect Jan. 1, 2011, will bar HMS faculty from delivering promotional talks for device and drug makers and from accepting personal gifts, travel, or meals, according to a report in The Boston Globe.

On a Federal level, the Healthcare Reform Act will require pharmaceuticals to report gifts or payments over $10 starting March 31, 2013.