You are here: Home / Archives for Leyden

Israel Flying Aid, the Israeli global humanitarian organization, which was first to land in Haiti following the 2010 earthquake, has been distributing large supplies of gas to hospitals, food, batteries and generators to Hurricane Sandy victims.

“We have many years of disaster relief experience,” said Israel Flying Aid North American Operations Manager Moti Kahana.  “Israel Flying Aid, in having Israelis on the ground here in New York and New Jersey, have made Israel the only foreign nation to provide humanitarian assistance to the US during this disaster.  We are working in coordination with FEMA, local police, the American Red Cross and Jewish communities in New York, New Jersey and Connecticut.” 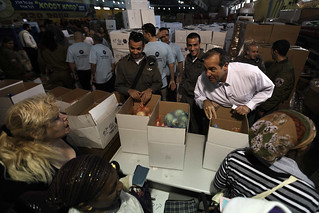 Kahana said that most of the efforts had been donated by Israelis living in the US, and this enabled gas to be distributed to hospitals in New York and New Jersey.

Joel Leyden, an Israel Flying Aid Operations Specialist who was with the IFA in Haiti, has been working with the Greater Hartford Jewish Community to distribute both food and generators on Long Island.

“We had a convoy of food and generators move out of the Greater Hartford area early yesterday morning,” said Leyden.  “The food had been donated by Panera Bread and Dunkin Donuts in the Hartford, Manchester Connecticut area.  This food was distributed to hurricane victims on the south shore of Long Island, the Nassau County Police, the Free-port Fire Department and the Red Cross Shelter which is set up at Nassau Community College.”

Leyden said that when they spotted hundreds of people lined up at gas stations to pour gas into their containers, they would get out of their cars and feed these people as they waited.  The donuts and bread created smiles and positive moods which replaced the trauma of suffering in the dark and cold, he said.

“We are so very proud to see you, to welcome you to New York,” said Dr. Jason Mallin, who normally practices neurology at North Shore University Hospital but was now volunteering with the Nassau County Department of Health.  “We read about Israel and the great work you did in Haiti.  We have thousands here that need you.  It’s awesome that you are here!”

Michael Duarte, a Red Cross volunteer from California who was supervising the Long Island shelter, hugged the Israel Flying Aid team as they arrived.

“We had some bad press as a result of misunderstandings,” said Duarte.  People in Staten Island, New York were looking for us but due to a New York State law, we could not start operations until after three days.  We are now operating at full capacity throughout New York City and this Red Cross shelter at Nassau Community College with over 900 clients.  These people have lost their homes.  Lost everything.  We are here for them and so very pleased to receive your good help.”

Duarte, who hadn’t slept in three days, had coordinated a first class shelter and his staff could not have been more professional.  Sleeping cots, Red Cross blankets, a cafeteria and even a play area for children had been carefully put into place. The fresh food from Israel Flying Aid was served as dinner that evening.

Super storm Hurricane Sandy, which was also referred to as Frankenstorm as it became one huge storm from three separate systems, slammed New York, New Jersey and the southern Connecticut shore with 100 mph winds.  The devastation was historic as over 100 people perished, thousands of homes were destroyed and millions were left without electricity.

“As Israelis, we know how to react to such disasters,” said Kahana.   “We are trained in the military to be prepared and ready at a moment’s notice.  This edge is what enables us to go places where others don’t and get the job done with little or no bureaucracy.  We are proud to help the New York, New Jersey and Connecticut communities, people who have provided assistance to Israel throughout the years.  What we critically need now is donations for our staff and volunteers to continue their life saving efforts as temperatures drop and people critically need generators and fuel for heat.”

Israel Flying Aid, which is a non-profit, non-governmental organization that assists global communities after earthquakes and other natural and man made disasters, have saved lives in Japan, Haiti, Iraq, Turkey, South Sudan and the US after Hurricane Katrina.