You are here: Home / Archives for Lake Titicaca

Fans of educational television may be familiar with the documentary film, The Quest for Noah’s Flood

that first aired in 2001 and repeatedly several times a year since then (and even available on VHS).  Plenty of fans, including teens, were in attendance on at the Penn Museum to hear Fredrik Hiebert of the National Geographic Society share behind-the-scenes details of the expedition that located the source of the Biblical Flood to the Black Sea.

Dr. Hiebert was an archeologist, fresh out of Harvard and studying the Silk Road trade routes when he got an “out of the blue” call from Bob Ballard, the discoverer of the Titanic, who said he was interested in the Black Sea, at one end of the Silk Road, for completely different reasons.  “His reason was that it was the world’s most special deep-water environment. In the Black Sea, there are no microbes, no oxygen, no wood bores.  If there were a shipwreck in that area, in deep water, it would be perfectly preserved…This was a dream situation.” 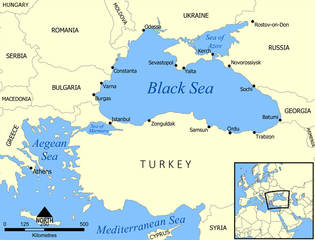 What they’ve found since then was not Noah’s Ark, but evidence that about 7,000 years ago — in 5120 BCE — a lake flooded at the end of the Ice Age and became the Black Sea.  This phenomenon was the largest infilling that surpassed all the floods mentioned in historical and cultural artifacts in Mesopotamia.   This time period could be defined variously by geologists as “instantaneous” or by archeologists as several feet for every couple of months.  One area near the Bosphorous Strait may have experienced the force equivalent to that of the Niagara Falls, with the resultant noise so great that it would have reverberated for several miles.  The shortest estimate for the infilling was in one year, but it could have taken up to a hundred years.

The Black Sea became the breadbasket of the Greek world and a center of maritime civilization.  When the Russians defeated the Ottoman Empire, they divided the Black Sea in two and the West was closed off from travel to that region.  Today, the Black Sea has experienced renewed interest in the Silk Road, with oil from Central Asia coming through the Bosphorous.

The same 4,000-year-old Bronze Age culture we had found in the desert oasis, we also found in the Black Sea.  But, surprisingly, we were also finding materials almost 6,000 years old.  This was very interesting because it showed a strong interaction around the Black Sea.  This was particularly interesting in light of what linguists have been proposing for some time about the origins of our language, Indo-European languages.  Indo-European language may not be affiliated with one single culture, but it may well be an intercultural language, a trading language.

His work moved into the water with the use of technology developed by George Bass, the “father of underwater archeology,” including remotely operated vehicles and sonar to “mow the lawn” as they systematically combed the seabed, just as archeologists have traditionally done on land.  One of their first harvests was a Byzantine ship from 500 AD.  One of the most unusual grant proposals he wrote was for no actual monetary funding, but for time spent on the U.S.S. Knorr, a research vessel suitable for going deep underwater.

Their project moved to the north to waters of the Black Sea near Bulgaria, and while interrupted in 2003 for Dr. Hiebert to lead an inventory project in Afghanistan (with support from the National Geographic Society and the U.S. National Endowment for the Humanities), has resumed with new technology to investigate the density of objects found at the seabed.  No other group is doing similar robotic underwater research.

The audience was treated to a lively, upbeat lecture by a seasoned speaker, who interspersed his academic words with an account of behind-the-scenes anecdotes.  His personal story?  When he graduated high school in the 70’s, he told his parents he didn’t want to attend college.  They consented to him going off to Paris, to serve as apprentice to an art studio.  Alas, when he landed, he found out they had no position for apprentices.  With no cell phone (as it was before our Always-Connected Generation) and no money, he was fortunate that they were willing to help him find another position, drawing for an archeological research team.  When he returned home after a year abroad, he was fascinated by archeology and he went off to study, eventually earning a Ph.D. from Harvard in 1992.

Since then, Dr. Hiebert has traced ancient trade routes overland and across the seas for more than 20 years.  He has led excavations at ancient Silk Road sites across Asia, from Egypt to Mongolia, including one at a 4,000-year-old city in Turkmenistan. He currently conducts underwater archaeology projects in the Black Sea and in South America’s highest lake, Lake Titicaca, in search of submerged settlements.