You are here: Home / Archives for Kauffman

The Philadelphia Jewish Voice, the League of Women Voters and other organizations across the state announced the formation of a new coalition called Fair Districts PA. The coalition’s purpose is to advocate for reform of Pennsylvania’s redistricting rules to make the process of drawing electoral districts impartial, transparent, and accountable.

Pennsylvania’s current redistricting plan is on the left. A hypothetical plan with compact districts is above on the right.

Congressional and state legislative electoral maps are redrawn every ten years following the national census. In Pennsylvania, the process of drawing those maps is controlled almost entirely by state legislators, a conflict of interest that puts politicians in charge and takes away the rights of voters.

Some states, most notably Arizona and California, have reformed the process by establishing impartial citizen commissions and clear standards for how districts are to be drawn. The results have shown increased voter engagement and more competitive elections.

END_OF_DOCUMENT_TOKEN_TO_BE_REPLACED

Republicans notched a major redistricting win on Tuesday with the unveiling yesterday of a Pennsylvania congressional map that deals a sharp blow to Democrats’ prospects in the state. The plan is not final — it must be passed by both houses of the state Legislature and then signed into law by Republican Gov. Tom Corbett. But Republicans control all levers of redistricting in the state, leaving Democrats with little power to contest the map.

“This congressional redistricting plan is breathtakingly brazen in its defiance of the interests of Pennsylvania’s voters” said Common Cause/PA Executive Director, Barry Kauffman, upon the Senate State Government Committee’s vote to approve the Congressional redistricting plan (SB-1249) that will be in place for the coming decade.  Calling the plan the “ultimate in political cynicism” the bill abandons any pretense of maintaining congressional districts as communities of interest.

The plan unveiled today features a district (CD 7) that meanders bizarrely through five southeastern counties  resembling the mythological three-headed dog that guards the gates of Hades.  Another (CD 15) stretches from the Delaware River (Bethlehem and Allentown areas) to the Susquehanna River (just south of Harrisburg) following close to the I-78 and I-81 corridors; while another reaches from the Delaware even deeper into the Allegheny mountains (CD 10).  One western Pennsylvania district, resembling an emaciated hammerhead shark, reaches from the Ohio border to Johnstown.

Meanwhile, Southeastern Pennsylvania’s fractal lines wind and intertwine in such a way that it is difficult to tell who lives where, and the 7th Congressional District is barely contiguous. On the other side of the state Congressmen Mark Critz and Jason Altmire have been drawn into a district together and will have to compete in the Democratic primary.

Common Cause/PA noted that the legislature has had the census data, on which the redistricting plan is based, since the beginning of April, but did not release its proposed plan until December 14th.  The legislature could easily have developed the new congressional district plan by the end July, put it out for 60 days of public comments and public hearings, and still passed it before the end of October.  Instead, with the date for candidates to circulate nominating petitions looming just six weeks away, the bill will move forward on the legislative fast track, with no public hearing on the plan, and no meaningful opportunity for interested citizens and community leaders to review the plan and attempt to improve it during its one week of legislative life.

While states likes Iowa, California and Arizona have moved forward to take redistricting out of the hands of self-interested politicians whose principal goals are to create a gerrymandered advantage for their parties and to protect incumbent lawmakers from the voters, Pennsylvania’s system remains the ultimate incumbency protection program.  Several senators even noted that Pennsylvania’s system manifests an abuse of power regardless of which party is in charge.  “If Pennsylvanians ever hope to take back control of their government” said Kauffman, “we must reform our system for drawing legislative and congressional district boundaries.  This plan is a clear-cut case of politicians picking their voters in order to prevent voters from having a meaningful opportunity to pick their elected officials.”

The Democratic party has created a website where citizens can vote on which Congressional District is the most gerrymandered and a Rorschach test where you can propose what each district most resembles. (Examples include “Zombie aardvark in an airplane seat” [District 3], “A rabbit pulling the tail of a giraffe” [District 7]” and “A seahorse riding a platypus” [District 17].) 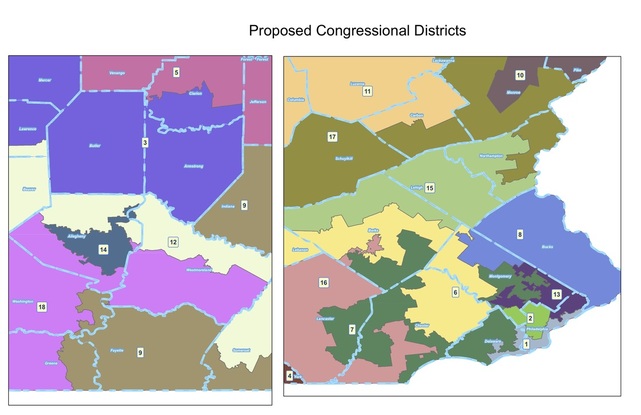 “Voting is the only way citizens can hold their government accountable. Based on what we’ve seen so far in this process, redistricting has become a game, which cripples competitive elections and ensures incumbency protection.

This is politics at its worst and a backwards movement in transparency and reform. We should make certain that every person’s vote counts, putting the interests of all the citizens first, not just the politicians. My proposal will not suppress the voices of 12.7 million Pennsylvania residents, but allow their voices to be heard through their vote.

Hanna’s legislation (H.B. 2078) crafts congressional districts for Pennsylvania that more closely align with suggestions offered by the Pennsylvania League of Women Voters and Common Cause.

My proposal creates a fair redistricting map, putting aside partisan interests and protecting the interests of the voters. This plan will minimize district splits in counties and municipalities and ensure equality of representation across 18 congressional districts. It will emphasize the compactness of districts while ensuring traditional communities of interest remain together in the same district.

The biggest political power-play of the decade is unfolding right now in Harrisburg — and it is, perhaps, the most self-serving and least transparent process of state government. It is known as reapportionment or redistricting.

Every ten years, following the census, each state is required to reconfigure the lines for its congressional and legislative districts, to ensure that everyone has equal representation. For its legislative districts, Pennsylvania establishes a five-person Legislative Reapportionment Commission (LRC), comprised of the top Republicans and Democrats in the state House and Senate, plus a fifth person who serves as chairman. The Pennsylvania State Constitution directs the LRC to ensure that each district has approximately the same number of residents, is compact and contiguous, and keeps counties, cities, towns, boroughs, townships and wards intact unless a split is “absolutely necessary”. This is supposed to lead to elections that are fair and competitive.

The reality, however, is much different. Looking at the proposed legislative maps is like a game of “name-that-shape.” Our redistricting system has been contorted into an incumbency protection game that virtually guarantees one party control of each district and the re-election of incumbents. This defies intentions of representative democracy in which elections are to be the citizens’ tool to hold power accountable. By “gerrymandering” legislative districts into bizarre shapes, legislators now cherry-pick their voters instead of voters picking their legislators.

The 2011 poster child for the abuse of voters’ rights to fair elections is manifested in central Pennsylvania’s 15th Senatorial district shown above. Currently, the district encompasses Harrisburg and its suburbs east of the Susquehanna River, plus a small adjacent section of York County. But in an attempt to protect an embattled incumbent Senator, the LRC created a new district that eliminates troublesome Harrisburg constituents. So instead of being contained almost entirely in a compact Dauphin County region, the new 15th district snakes through Dauphin, Cumberland, Perry, York and Adams counties creating a 150 mile horseshoe that dismantles any sense of community. The plan has been opposed by public officials throughout the five-county gerrymander.

The five-members of the Legislative Reapportionment Commission may have a greater impact on the outcome of Pennsylvania’s elections over the next decade than all of the state’s voters combined, because when they “gerry-rig” district borders, they essentially predetermine the probable outcome of most legislative elections for the coming decade.

However, the system can work the way the Constitution intends. One enterprising citizen has proven it (and did so working without the millions of dollars, expensive computer software and dozens of staff available to Pennsylvania’s Legislative Reapportionment Commission). Amanda Hoft developed an alternative plan which bests the LRC’s Preliminary Plan by strictly adhering to the constitutionally mandated standards. While one legislative leader proudly crowed that the LRC’s plan for the House splintered only 110 municipalities this year, as opposed to 121 in 2001, the Hoft’s plan broke up only 27 municipalities. On the Senate map, she split only 4 municipalities instead of the 27 fractured in the official plan. By eliminating all political criteria that are intended to build party advantage and safe seats for incumbents, she instead built districts to protect citizens’ interests in competitive elections and government accountability.

The documentary film Gerrymandering, opens with the quote from Thomas Pynchon;

“Nothing will create bad history more directly nor more brutally than drawing a line.”

Redistricting is all about drawing lines – lines that can empower citizens and communities, or lines that disable competitive elections and vitiate the will of the people. For 2011, Pennsylvanians must demand a redistricting plan that protects the political power of their communities, and bolsters government accountability through competitive elections – and we must insist that the Pennsylvania Supreme Court uphold the Pennsylvania Constitution’s standards for fair redistricting.

Before our state endures another “Gerry-rigged” redistricting in 2021, we also must reform the system for drawing district lines. California and Iowa have successful systems that could serve as models. Pennsylvanians can have fair and competitive elections that permit them to hold power accountable — but we will have to demand it. If we fail to fix the system, we will continue to be disserved by safe-seat politicians who owe greater loyalty to the funders of their political war-chests than to constituents; and we will continue to be befuddled and angered by the
unintelligible self-serving decisions they make.