You are here: Home / Archives for Jewish wisdom 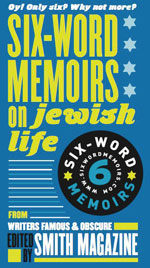 During this graduation season, you might need some guidance in selecting suitable gifts.  In the past, I’ve bestowed books of graduation speeches, which fascinate me, and I’ve given Harlan Cohen’s The Naked Roommate: And 107 Other Issues You Might Run Into in College

(which delighted the recipient because her mother did, indeed, have a naked roommate).  Now, I write to tout the whimsy and insight of Six-Word Memoirs on Jewish Life, edited by Smith Magazine in partnership with Reboot, a non-profit with a mission of triggering discussions about Jewish identity, community, and meaning.

Now known as “flash fiction,” the six-word story derives its literary genesis from lore that Ernest Hemingway won a bet with the challenge to write a novel in just six words with the following: “For sale: baby shoes, never worn.”  A reviewer from the St. Louis Post-Dispatch called this style an American haiku.  Smith Magazine has trademarked its Six-Word Memoirs series; this newest addition is a much quicker read than a graduation speech!

More after the jump.
Here are my six personal favorites from the book:

Be a mensch; pass it on.
— Marsha Stein

I was in need.  Heard: Hineini.
— Elissa Froman

Like Zusya, trying to be me.
— Rabbi Steven Rubenstein

Publisher’s note: Hillel and Shammai were both asked by a gentile to explain the Torah while he stood on one foot. Shammai dismissed the man for expecting to be able to summarize Jewish thought so briefly, but Hillel the Elder rose to the challenge and said “What is hateful to you, do not do to your fellow: this is the whole Torah; the rest is the explanation; go and learn” (Shabbos 31a) Accordingly, the expression expression al regel achat (on one foot) has entered modern Hebrew as an expression of extreme brevity showing that the six-word memoir is not as new a concept as one might have thought. In fact, in Hebrew, Hillel’s summary of the Torah is just five words: