You are here: Home / Archives for Gershman Y

The 33rd season of the Philadelphia Jewish Film Festival will kick off tomorrow, November 2, at the Gershman Y, 401 South Broad Street, Philadelphia, with the film God’s Neighbors.

In the film, three young working-class zealots appoint themselves enforcers of the Torah in their neighborhood. The group’s dynamic is challenged when the team’s leader threatens a young woman who defies their rules, yet awakens his desire. The showing will be followed by a Skype conversation with the film’s director, Meni Yaesh.

The Festival, which will feature 18 films in nine different venues, will be concluded November 16. More than half of the showings will be Philadelphia premiers.

Now in its 16th year, New Filmmakers Weekend celebrates the work of first-time Jewish directors for excellence in filmmaking. This season, the Festival will present three awards:

The Festival will also recognize and present the short film The Earthquake by a local new filmmaker Danielle Lessovitz. New Filmmakers Weekend will be hosted by Dan Friedman, Managing Editor of The Forward. 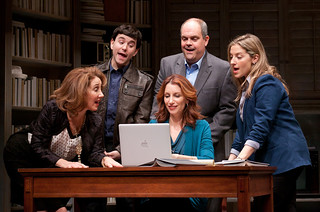 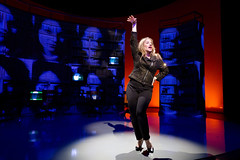 Israel was the featured nation at the Equality Forum, a worldwide LGBT rights conference based in Philadelphia, in May 3-6, 2012.

The forum began with a VIP kickoff reception held at the Gershman Y, Broad and Pine streets. In the lobby of the Gershman, the works of Israeli photographer David Adika were displayed, as part of the 13th Annual Gay and Lesbian Art Exhibit. Titled Equator, Adika’s photographs were displayed on the north, east south, and west sides of the lobby, representing similar regions in Israel.

Explaining the exhibit on the walls of the lobby, Adika said, “Here there are four walls, the south wall, the north wall, the east wall, and the west wall. Each wall are related to their (equivalents) in Israel.” The south wall, he said, shows the Dead Sea, which is in the south of Israel; “I want to show in this work,” he added, “two (opposing) forces, the one that sinks, like this, it’s a sinkhole, and the one that floats, when you’re in the Dead Sea, you float.” The opposite forces at work, added Adika, were “sinking and floating, with all the metaphor you can think of.”

Debra Blair, Chair of the Board of the Equality Forum, said of Israel as a featured nation, “We’ve had several key countries from around the world, that are in stages of Gay liberation. I think to look at Israel, amongst the number of countries we’ve looked at, it’s just timely. There’s quite a bit of controversy around  having Israel, and that’s all the better for us, because that means we’re pushing the envelope for folks to be seen in terms of what they’re trying to do to get in a better place for equality for LGBT citizens.”

Elaborating on the controversy around Israel, Blair added, “With any particular country that has extenuating issues, that may or may not even deal with the LGBT movement, there will always be folks that, when you decide to honor or feature a particular country, they look for things to say, ‘Oh, they’re doing this, they’re doing that wrong.’ We’re simply focusing on the issues of LGBT civil rights around the world. When you have folks coming in to talk about what Israel may or may not be doing in terms of their political positions, or things of that nature, that’s where we put the stops on.” The focus, said Blair is “what (Israel is) doing to move the LGBT citizen to a different place of visibility.”

What has Israel done towards LGBT equality? “They have a number of initiatives,” replied Blair, who is an Assistant Professor in the School of Tourism and Hospitality Management of Temple University. “One of things we look at are those countries that are looking at (the LGBT) market as a potential tourism market. They, like many other countries around the world, are looking at the LGBT market and saying, ‘Come to Israel, we are a great destination.'” Israel, said Blair, has “challenges like every other place around the world around freedoms, but (Israel is) trying to be pro-active, to be welcoming.”

At the start of the kickoff, Malcolm Lazin, Executive Director of Equality Forum, spoke of the history of the Forum, stating that the organizers called it “a civil rights summit,” adding, “People in our own community really didn’t believe us, they thought we were engaging in hyperbola. Back when we said (the Forum) has an international focus, there was a moment in time when people were not focusing internationally, in terms of our national organizations…

“We’re (of Equality Forum) proud of our history,” added Lazin, “As you know, we co-produced (the documentary) Gay Pioneers, at a moment in time when very few in this community knew who Barbara Gittings was.” Gittings, along with Frank Kameny, were, as Lazin put it, “the father and mother of our organized (LGBT) civil-rights movement. We make the film Gay Pioneers with PBS and went out across PBS (stations) and schools across the country.”

Daniel Kuttner, Counsel-General of Israel to Philadelphia, said, “Israel resides in a rough neighborhood…but in spite of the hardship we sometimes bear, Israel is a state (with a) thriving cultural life-music, dance, theater, literature, I could go on,” as Kuttner commended David Adika, “whose photographic art is critically acclaimed throughout the world.” Kuttner gave his thanks to the University of the Arts, the Gershman Y, and Equality Forum for their work in putting together the events of the Forum.

Malcolm Lazin presented the Forum’s Distinguished Service Award to local philanthropist Mel Heifetz. “Many of you know Mel,” added Lazin, “because of his really remarkable philanthropy, there is certainly in the Philadelphia region who has been more philanthropic across the board to the LGBT community.” Heifets, said Lazin, helped to pay off the mortgage for the William Way LGBT Center, located at 13th and Spruce streets, and has donated generously to the AIDS community and to gay-friendly political candidates.