You are here: Home / Archives for falafel

I was inspired by some ripe zucchini that I purchased. There is a Greek recipe for chickpea-free “falafel.” I decided to prepare it. 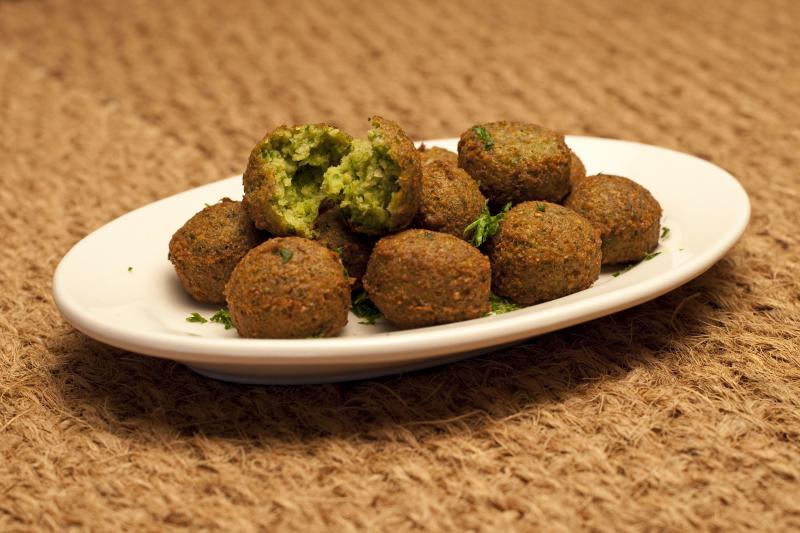 As soon as I announced that I was going to attempt to make oven-baked falafel, I was inundated with requests to publish a recipe. Falafel is a favorite Middle Eastern dish, especially where I live. No matter where you travel to in the Middle East, it is hard to miss a falafel stand on every corner of the street. Around later morning and early noon, you will notice a long line starting to form in front of any falafel vendor you see. For those of you who are not familiar with Middle Eastern food (for better or for worse, I am gradually starting to become more affluent with the culture and food that I am surrounded with), falafel is a deep-fried ball made from ground chickpeas or fava beans, depending on which region you come from. Falafel is usually served in a pita or wrapped in a flatbread known as lafa. The falafel balls are topped with salads, pickled vegetables, hot sauce, and drizzled with tahini-based sauces. Falafel balls may also be eaten alone as a snack or served as part of a meze (a selection of small dishes or spreads).

Full recipe after the jump.
Growing up, I never really cared for falafel, until one fond memory completely changed it all. Many eons ago, I was a camp counselor at a sleep-away camp in the suburbs of Pennsylvania. We had a camp chef who’s culinary skills and attitude had yet to be desired. Ironically, the only thing he managed to perfect was falafel balls. In fact, the only thing we looked forward to having for lunch was falafel. Ever since I came here, I never had the stomach to eat falafel anywhere outside of the Middle East. Most food that you eat at restaurants, fast food chains, and even vendor booths can easily be replicated at the comfort of your own kitchen. Making falafel is not as complicated as it looks. If you made vegetarian or even meat patties before, this is not too far off.

As I reiterated before, falafel is traditionally deep fried in oil. I enjoy my falafel, but not when my pita is saturated from the grease. So I looked for a healthier solution and came up with my own rendition after borrowing an oven-baked falafel recipe online. I will provide you with the basic ingredients for this recipe. After that, its entirely up to you to make your falafel any way you desire. Some like to add some extra parsley to give the falafel a green hue. Other may add tumeric. For a bit of spice, you can sprinkle in some chili or cayenne pepper.

For this recipe I used chickpeas, but you can use fava beans or a mixture of both. If you have a short attention span, you can take a shortcut and use canned chickpeas. I used frozen chickpeas because it doesn’t contain nearly as much sodium as the canned goods do. Prior to making the falafel mixture, I sauteed some onions and garlic rather than blending them raw with the chickpeas. Akin to most patties, falafel requires some flour in order to hold all the ingredients together. That way, you can form balls without them falling apart. If you suffer with celiac disease or sensitive to wheat, feel free to use gluten-free flour. You can eat the falafel balls as they are, or serve them in a pita stuffed with salad. Use any of your favorite Middle-Eastern spreads such as hummus or tahini.

For this recipe, you will need:

Challah Maidel is a blog about healthy kosher eating.

There are so many types of breaded chicken! For a new twist on an old standby, here is a recipe for oven baked chicken with falafel flavored breading. Instead of corn flakes, we crumble Bissli, the ubiquitous Israeli snack food, to make the breading.
END_OF_DOCUMENT_TOKEN_TO_BE_REPLACED