You are here: Home / Archives for Anousim 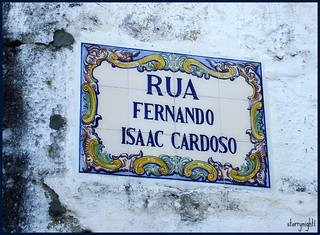 Isaac Cardoso was a Jewish physician and philosopher born in the small village of Trancoso, Portugal, in 1603 to a family of Bnei Anousim (people whose Jewish ancestors were compelled to convert to Catholicism more than five centuries ago and whom historians refer to by the derogatory term Marranos). Cardoso and his family fled Portugal to escape the Inquisition, eventually resettling in Venice. They weren’t alone: the town of Trancoso, once home to a flourishing Jewish community was, by the time the Cardoso family left, nearly emptied of its Jewish population. It has been that way for 500 years.

The full story after the jump.
Now Cardoso is back — in name, at least — with the establishment of the Isaac Cardoso Center for Jewish Interpretation: the first Jewish cultural and religious center in Portugal in half a millennium. Last week, the Mayor of Transcoso, Júlio José Saraiva Sarmento, and Shavei Israel Chairman Michael Freund signed an historic agreement regarding the opening of the center, which will include an exhibition about the Jewish history of Portugal and the renewal of Jewish life in the region in recent years, as well as a new synagogue called Beit Mayim Hayim — literally, “the House of Living Waters.”

This past June, Shavei Israel’s emissary to Portugal, Rabbi Elisha Salas, visited Trancoso to affix a mezuza — the first in the village for hundreds of years — to the entrance of the synagogue during the Center’s dedication.

Under the agreement announced last week, the Trancoso municipality granted Shavei Israel the right to administer the Center and organize Jewish cultural, educational and religious activities on its premises. These activities will be overseen by Rabbi Salas. Jose Levy Domingos, a Trancosco resident who serves as an advisor to the mayor, will be the municipality’s liaison and will work closely with Rabbi Salas.

The main work of the Center will be outreach to the many Bnei Anousim who reside in the area. “I believe the new cultural center will play an integral role in assisting those Bnei Anousim who wish to return to the Jewish people,” said Michael Freund at the ceremony.

For centuries, Transcoso was home to a large number of Bnei Anousim and it has a riveting history. We are now making great strides in providing the opportunity for a renewal of Jewish life in the region for those who seek it.

This center is very important to the people of Transcoso and all of Portugal. I am sure that it will leave its mark on the region, and it signifies our commitment to recalling the past and rebuilding Jewish life.

Thank G-d, we have the strength to continue. We start today with hope and faith, and we shall arrive in the end to join all the sons of Israel in Zion.

The Center’s construction is estimated to cost about $1.5 million and it is likely to attract increased tourism to the area. But perhaps even more important, it will “commemorate the countless Portuguese Jews who were persecuted, displaced or forcibly converted more than five centuries ago,” said Freund. The Center will include two exhibition halls, public assembly rooms, a small garden and video projection systems.

Transcoso, situated in northeastern Portugal, had a large Jewish community in the 14th and 15th centuries. By some estimates, nearly half of Trancoso’s population was Jewish; none of its 5,000 residents are today. Jewish merchants first arrived as early as the 12th century. They were bolstered in the following centuries by Jews who migrated from the kingdoms of Castile and Aragon, located in what is now modern Spain.

Trancoso today is a well-preserved medieval town dominated by a castle with a walled enclosure.  One of the best-known Jewish historical buildings in the village is the Casa do Gato Negro (“The House of the Black Cat”), so named for a sculpture of the Lion of Judah situated high on an exterior wall facing one of Trancoso’s ancient streets; it used to serve as a synagogue and rabbi’s residence. One of Transcoso’s most famous Jews was the mysterious Banbarra (1500-1545), a shoemaker and poet, who prophesized the future of Portugal and was a source of inspiration for many writers.

As for Isaac Cardoso, after whom the Center is named, after arriving in Venice, he and his brother Miguel publicly embraced their formerly hidden Judaism. Isaac Cardoso went on to publish a number of important works on philosophy, medicine and theology, including an important treatise defending Judaism and the Jewish people from various medieval stereotypes, such as ritual murder accusations and the blood libel.