You are here: Home / The Kosher Table / The New Home-Made Gazoz 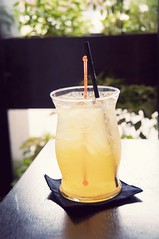 In primeval times, the earliest humans enjoyed effervescent water from springs in which sodium carbonate from underground rocks dissolved into the water. This created the first natural soda.

In the 18th century, Joseph Priestly discovered that holding a bowl of water over a vat of beer would infuse the water with carbon dioxide. This was the first homemade seltzer water.

Soda syphons were invented in the 1800s. These were special bottles that could dispense soda without releasing all of the trapped gases, and kept the soda from going flat. Syphons were very popular in the 1920s and 1930s.

During World War II, the syphon factories in Europe were bombed. Carbonated water began to be commercially bottled and marketed, and soda syphons fell out of favor.

Recipe after the jump.

In Israel, however, soda syphons remained popular well into the 1960s. The soda they produced was called gazoz. As a special treat, children were allowed to mix the plain seltzer water with a sweetened fruit syrup concentrate.

Now the pendulum is swinging back: Due to concern for the environmental impact of disposable soda containers, many people are returning to the tradition of making their own seltzer water at home. Instead of adding the sugar-laden syrups of the past, they are flavoring their sodas with fresh fruit.

I initiated the switch in my house by purchasing a soda-making machine from Sodastream. I chose the SodaStream Penguin Sparkling Water Maker. It comes with dishwasher-safe glass bottles. Once it arrived, it was time to get creative and make some delicious sodas.

Some of the most refreshing drinks I know are called aguas frescas, “fresh waters” in Spanish. They are made with natural tropical fruit juices, mixed with cold water. I saw no reason why this would not taste even better with carbonated water.

Where would I get all the fresh tropical fruits that I craved in February in Philadelphia? I decided to reach straight to the source: Goya Foods sells unsweetened tropical fruit pulp. The fruits are picked at the peak of ripeness, and processed on the spot. The pulp is frozen to lock in the flavor, and then shipped to the U.S.

Here is an easy recipe for aguas frescas. I like my drinks tart, but you may sweeten yours with natural grape or apple juice. Goya Foods sells the pulp of passion fruit, papaya, mango, tamarind, guava, and coconut, among others.