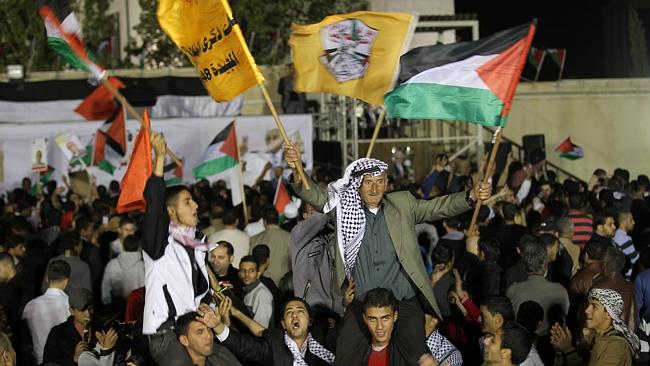 (CAMERA) Melbourne, Australia’s Herald Sun published an article revealing the cruelty that manifests among the Palestinians.

In the article Israel may pay for tolerance it shows to killers, Alan Howe wrote about some of the individuals released by Israel as a gesture for the current round of peace talks:

Take Issa Abd Rabbo. When he was released recently, he was welcomed home personally by the Palestinian president, Mahmoud Abbas, who raised Rabbo’s hand in victory and referred to the double killer as a hero.

He calls men like Rabbo “the best of the Palestinian people”.

The murderer was interviewed on television the other day. I’ll let him describe what happened:

“There was supposed to be a military operation shooting at a bus transporting Israeli soldiers … I was surprised when on my way to the area, I waited, waited and waited and the bus didn’t come.

“I was forced to carry out an operation on my own, an improvisation, I took it upon myself.

“An Israeli car approached, with two in it. I said, here’s a chance and I don’t want to return empty-handed. They left the car … and sat down under a pine tree.

“I told him: ‘You are not allowed here. This is our land and our country. You stole it and occupied our land and I’m going to act against you.’ They were surprised by what I told them. I tied them up, of course, and then sentenced them to death by shooting, in the name of the revolution.

“I shot them, one bullet each, and went [hiding] in the mountains … I went to my aunt and told her: ‘We have avenged Muhammad’s blood.’

Such journalism is necessary to expose how twisted Palestinian society has become, and to raise questions about a lack of compassion and a cavalier attitude about justice among Israel’s political elite.