You are here: Home / Uncategorized / Kerry: Sharon “Risked It All” to Live the Dream of Israel 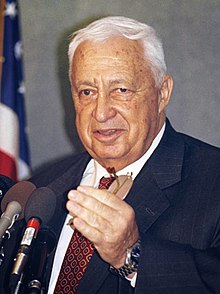 — by Secretary of State John Kerry

Ariel Sharon’s journey was Israel’s journey. The dream of Israel was the cause of his life, and he risked it all to live that dream.

I remember reading about Arik in the papers when I was a young lawyer in Boston and marveling at his commitment to cause and country.

I will never forget meeting with this big bear of a man when he became prime minister, as he sought to bend the course of history toward peace, even as it meant testing the patience of his own longtime supporters and the limits of his own, lifelong convictions in the process.

He was prepared to make tough decisions because he knew that his responsibility to his people was both to ensure their security and to give every chance to the hope that they could live in peace.

During his years in politics, it is no secret that there were times the U.S. had differences with him. But whether you agreed or disagreed with his positions — and Arik was always crystal clear about where he stood — you admired the man who was determined to ensure the security and survival of the Jewish State.

In his final years as prime minister, he surprised many in his pursuit of peace, and today, we all recognize, as he did, that Israel must be strong to make peace, and that peace will also make Israel stronger. We honor Arik’s legacy and those of Israel’s founding generation by working to achieve that goal.

Arik is finally at rest, and all of us in the U.S. pray along with his sons, Gilad and Omri, the Sharon family, and all the people of Israel. Our nation shares your loss and honors Ariel Sharon’s memory.