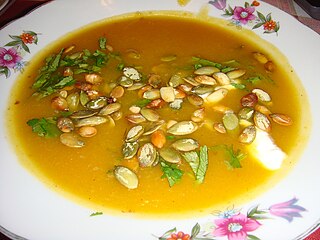 As Arctic winds blow into Philadelphia, and the snow piles up, our instinct to consume warm, hearty soups kicks in.

This is an opportunity to make use of the many varieties of pumpkins and squashes that are widely available now.

Pumpkins are high in vitamin A, and have a good amount of vitamin C, iron, and calcium. Also, they are fat free.

When combined with onions, garlic, ginger, herbs, and spices, the pumpkin shines as a winter entree soup. Pumpkin-ginger soup can be served with a green salad, a hearty bread, and a selection of cheeses.