You are here: Home / The Kosher Table / Book Review: One Egg Is a Fortune 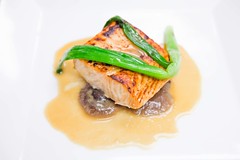 One Egg is a Fortune, edited by Pnina Jacobson and Judy Kempler, is three books in one: a high quality gourmet Jewish cookbook, a table book of magnificent food photographs, and an anthology of fascinating narratives from fifty contributing authors from around the world.

The editors put ten years into developing this beautiful volume, and it is perfect as a gift.

Taste test? The closest to that that we can do is to offer a section from the narrative of the former United States ambassador, Dennis Ross, and his excellent recipe as well. B’tayavon!

I was sent as ambassador of the United states to meet with Arafat in Tunis in 1993. This was to be the first of many meetings. Arafat liked to play the host, insisting on serving our delegation lunch.

We were about ten people around the table, four from the United States. A meal of roast chicken and potatoes had been prepared. Arafat was determined to not only serve the meal, but also to carve the chicken.

Banter lightened the situation with words to the effect of, “Are you actually going to cut my food for me as well?” with a reply of, “If you like,” and my response of, “No, thank you. The last person to cut my food was my mother.”

Dessert followed and Arafat passed around an assortment of Arabic sweets such as baklava and kanafi, a Middle Eastern dessert made from cheese and brown sugar. The meal was, in fact, good and just what both parties needed to continue.

From then on food became part of the negotiation process. Dennis fish is a variety of bream found in the Red Sea, so when I walked into a meeting, I would ask, “Let me guess what we are eating today — Dennis fish?” Arafat would laugh and at least in this context, he had a sense of humour.

This repartee continued every time we met. I heard that even in my absence Arafat would mention this wordplay just to irritate the Israeli delegation. (Page 197)