You are here: Home / Uncategorized / Next Thanksgivukkah in 80K Years? Wrong!

The upcoming convergence of Hanukkah and Thanksgiving is not quite as rare as some have claimed.

Some of our older readers have already celebrated Hanukkah on Thanksgiving, and our younger readers may do so again, despite widespread Internet hoaxes claiming this has never happened before, or that it will not do so for 79,811 years:

So what has made this fallacy viral, and how does it happen that there were also times in years gone-by with convergences as well?

Some of the fallacy impact came from an article in the Boston Globe which reported a “calculation” that Thanksgivukkah “won’t repeat for another 79,043 years.” They also reported:

The magic struck last November, when Dana Gitell, a marketing specialist at NewBridge on the Charles, a Dedham retirement community, was driving to work.

She knew the holidays were going to overlap this year “because I had seen a list of holiday dates on the back of a Combined Jewish Philanthropies calendar,” recalled Gitell, the wife of Seth Gitell, a former Menino press secretary now working for House Speaker Robert A. DeLeo.

She was mentally running through a list of clunky names for the phenomenon — Hanukkahgiving? — when the more melodious Thanksgivukkah came to her.

Gitell, her sister-in-law, and a friend — an artist with New Yorker covers in her portfolio — promptly designed Thanksgivukkah illustrations and contacted ModernTribe.com, a hip Judaica site. Together, they created products including cards and a $36 T-shirt that reads “Thanksgivukkah 2013: 8 Days of Light Liberty & Latkes.”

An article in Haaretz noted that she did not have permission to use the image she chose and received a cease and desist order on October 5.

More after the jump.
Mathematicians disagree about recurrence dates on their websites, so it does take work to arrive at what seems to be a truly accurate answer. The most helpful site seems to be of the three Lansey brothers, whose blog with correct information was already online in 2012!

These three brothers did historical research on past dates of Thanksgiving, and posted the years listed in the table above when Thanksgiving and Hanukkah overlapped. The years 1945 and 1956 are marked with an asterisk because those were only Thanksgiving in certain states that maintained the date for Thanksgiving adopted by President Franklin D. Roosevelt (and mocked as Franksgiving). That date was nullified in 1941 by an act of congress settling it into the 4th Thursday.

The creator of the Intel 8086 chip, Steven P. Morse, pointed the convergence out on his website back in in 2012, although he did not adjust for the historical differences in the dates of Thanksgiving in years gone-by. He further explains the solar/lunar calendar drift issues involved:

Chanukah-before-Thanksgiving occurred in the past, and with decreasing frequency as time went on, is because there is a slow drift between the Hebrew Calendar and the secular (Gregorian) calendar. That drift amounts to one day every 217 years. So in about 80,000 years it will drift by one full year and we’ll be back to where we started.  At that time we will once again be lighting Chanukah candles at our Thanksgiving dinner.

Jonathan Mizrahi nicely illustrated this drift in the Hebrew calendar: 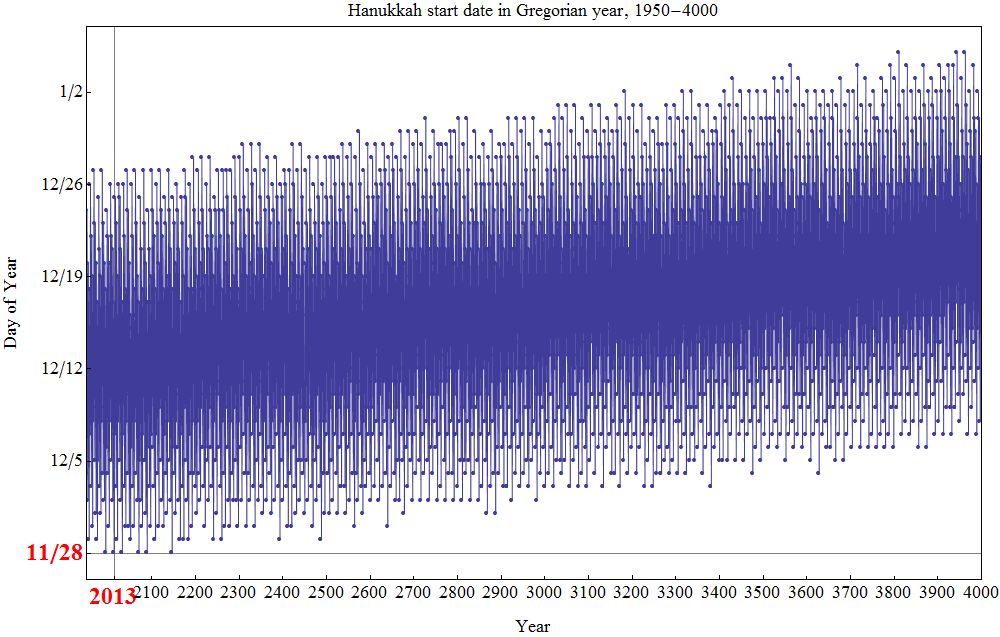 Understanding the Jewish calendar would require a further article because it is not a strictly lunar calendar. And — this may come as a surprise to some — the Jewish calendar begins with Passover, the original Jewish New Year according to the Torah which requires Passover to occur in the Spring. Originally ensuring the proper alignment of dates and seasons was accomplished through observation-based adjustments:

… when the fruit had not grown properly, when the winter rains had not stopped, when the roads for Passover pilgrims had not dried up, and when the young pigeons had not become fledged. The council on intercalculation considered the astronomical facts together with the religious requirements of Passover and the natural conditions of the country. — Comprehensive Hebrew Calendar

But then, in the fourth century, according to Judaism 101:

Hillel II established a fixed calendar based on mathematical and astronomical calculations. This calendar, still in use, standardized the length of months and the addition of months over the course of a 19 year cycle, so that the lunar calendar realigns with the solar years. Adar I is added in the 3rd, 6th, 8th, 11th, 14th, 17th and 19th years of the cycle. The current cycle began in Jewish year 5758 (the year that began October 2, 1997).

If you are musically inclined, you may find it helpful to remember this pattern of leap years by reference to the major scale: for each whole step there are two regular years and a leap year; for each half-step there is one regular year and a leap year. This is easier to understand when you examine the keyboard illustration below and see how it relates to the leap years above.

It’s nice to note that some of the children alive today will be here for the next Thanksgiving-Hanukkah convergence. May it be so!

Addendum: There are some who wrote well-publicized articles that overlooked the evening overlap of these festivals. Jewish holidays start at sundown and secular holidays start at sunrise. They wrote their articles declaring a never-to-be-repeated event by disregarding the almost 8 hours of convergence the evening before. Which to my mind is odd for Jewish writers to do, given we know that the evening rituals and meals of both Hanukkah and Thanksgiving are the spiritual main events. For Jews, given that sundown is approximately 4:19 pm, we will be lighting our menorahs and then eating our latke-stuffed turkey dinners (or whatever fusions evolve over time) there-after. Evening convergences have happened in the past, and will continue to do, as the table at the article’s beginning demonstrates.