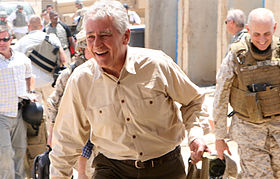 “I’m very pleased,” said Sen. Lindsey Graham, the South Carolina Republican who during his confirmation hearing grilled Hagel on controversial remarks he made about Israel. Graham voted against Hagel but now says he’s happy with the way Hagel has tackled a flurry of national security challenges in his first three months on the job.

More after the jump.
Senator Kelly Ayotte (R-NH), also formerly a staunch Hagel opponent, approved to Politico of the job he has done thus far:

I think he’s trying to bring people together, even people who didn’t support him. So I appreciate his efforts, and I think he’s off to a good start.

In his short tenure as Secretary of Defense, Hagel has astutely navigated the immense challenges of sequestration — a $40 billion cut on his first day — an unpredictable and dangerous North Korea, and the volatile Middle East. It is great to see that Republicans are giving credit where credit is due. Hagel has done an great job thus far — especially concerning the US-Israel relationship.