You are here: Home / Uncategorized / Lag B’Omer: Dinner From The Embers 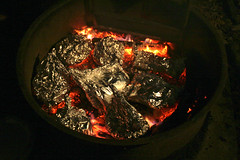 Four campfire-made recipes after the jump.
The Omer was a unit of measure of barley that was offered in the Temple on the second day of Passover. The counting of the Omer is a somber time, when Rabbi Akiva is commemorated.  Rabbi Akiva took part in Bar Kokba revolt.  He defied the Roman emperor Hadrian’s edicts not to practice or teach Judaism.  Rabbi Akiva taught thousands of students.  A plague arrived in Israel.  Twenty four thousand of his students succumbed to it and died.  Weddings, parties, dancing, and haircuts are traditionally not conducted during the counting of the Omer.

Lag B’Omer is a joyful time when people light bonfires. Dinner is cooked in the embers and is eaten outside under the stars. Celebrants sing Israeli folk songs, and dance horas around the fire.

I like to prepare Lag B’Omer treats in aluminum foil packets. They can be assembled in advance, and then buried in the embers. Dinner cooks itself while everyone has fun. Here are some suggestions: 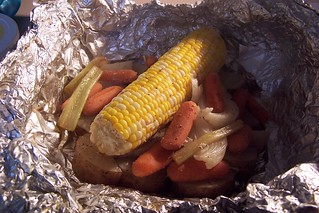