Yesterday Nate Silver handicapped next  year's gubernatorial contests, and Tom Corbett came in as fifth most  vulnerable. All well and good, but my current interest is the  Pennsylvania race, mostly because I live here, and enough is enough. I'm  not the only person who feels that way: I can't find anyone who thinks  Corbett is doing anything other than a horrible job.

When you  look at gubernatorial races, "most people" don't have an opinion. They  might know who the governor is, and where he/she lives (that capital  thing again, sorry) — but it's not generally a race that people know  much about until a month or two out. Not here. Not this time.

Everyone  knows about Jerry Sandusky. People living under rocks know about Jerry  Sandusky. And the overwhelming majority of them know that Tom Corbett  was the AG when charges were raised, that he didn't prosecute for 3  years, and that he got $640,000 from Jerry's charity for his first  gubernatorial run. Some of those people living under rocks are living  under rocks and not indoors because of the massive cuts that Tom Corbett  personally fought for: to rescind monetary aid to the poor and  disabled, to decrease education funds; to deny a Pennsylvania health  insurance exchange; to illegally sell off the PA lottery to a British  company; and to privatize liquor sales, throwing thousands out of work  and handing the liquor licenses to Wal-Mart. And who can forget his line  to pregnant women about to get a vaginal probe they don't need? "Just  close your eyes."

Yes, we know him. Nate Silver might say that due  to polling data and whatever else he puts in his secret sauce, there  are 4 more vulnerable governors for 2014. But the animose to Tom is  personal.

So who's running? The list is pulled from Wikipedia, and is in alphabetical order. I've added my comments. 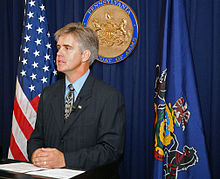 Let's  sum up. Allyson Schwartz announced yesterday, and she is "the name" in  the race so far. She's the only one of the declared candidates with any  name recognition. John and Max are going to fight it out in their own  little universe and will burn one another out. Tom may peak, but he  doesn't have staying power. Allyson has a lot going against her. She is  über liberal, which is great in her Congressional district, but is not  going to play statewide. She's a Jewish woman, which is also not going  to play. She was a supporter of Hillary Clinton in 2008, but it's  unlikely she'll be able to make enough use of the remaining Clintonistas  in the state: it's more likely they'll migrate to McGinty.

Rob McCord is the man to beat on the Democratic side, IF he  runs. The smart money says that he'll only run if he calculates that he  has a high win percentage. I don't expect we'll hear from him on that  issue for a few months.

And then there's Katie McGinty. I am  surprisingly impressed with her on a number of levels. She's smart, and  both her bio and her work are compelling. But it's more than that.  There's a political trait that's rare, and something one is either born  with or not, and she's got it. It's the ability to meet a person and  remember them. She came to speak to our local Democratic group last  week, and when she walked in, I went to greet her, and she looked at me  and said "I know you…" she paused and said "I saw you registering  voters at the mall." Seriously — that would have been last year, or  possibly in years past. Trust me, I'm not that memorable. But she has  the eye. When she spoke, she talked about her work at the state and  Federal levels. She has moxie and confidence, and seriously good  politics. Evaluating her public presence vs Allyson's presence the last  time I spoke with her at a public event, it strikes me that there's no  contest.

A few notes on Bruce Castor. He was a decent District  Attorney, and the office ran well under him. As I said, if Tom declines  to run, Castor will easily claim the Republican nomination. He's a  street fighter, and if Tom runs, it's important to remember that there's  bad personal blood between the two men going back to the 2004 AG race,  which was the first time the two competed head-to-head.

So that's the initial frame, folks. It could be a bloodbath, but it will be fascinating to watch.