You are here: Home / Uncategorized / Special Coverage: A Palestinian Died (Okay, and 6,000 Syrians Too) 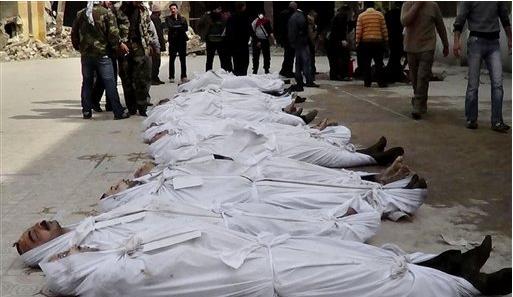 (CAMERA) An Associated Press report published on April 1 noted that at least 6000 Syrians were reported killed in the civil conflict in March, the highest single month toll yet. During this same period, the main news item of the Israeli-Palestinian conflict was the death of a single Palestinian hunger striker, a convicted terrorist, in an Israeli prison.

According to a tally from a Lexis-Nexis media search, the New York Times published a total of 39 articles (news articles, editorials, and on its blog) in March that were mainly focused on Israel and the Palestinian conflict, plus an additional 24 on U.S. President Barack Obama’s visit to Israel. The Nexis search turned up 59 pieces — a substantial proportion were brief blog items — focused on the conflict in Syria.

More after the jump.
While acknowledging that The Times is not ignoring the Syrian conflict, considering the disproportionate toll in the two conflicts, 6,000 to 1, it is striking that the number of articles is of a similar magnitude. However, even more significant than the number of articles is the disparity in the depth of coverage. Here The Times continues to provide much greater amplification of the Palestinians plight in comparison to that of the Syrians.

In a month marked by accelerating slaughter in Syria, The Times chose to publish an 8,000-word cover story for its Sunday magazine (“Is This Where The Third Intifada Will Start?“), by Ben Ehrenreich, who has called for an end to the Jewish state and waxes poetically about the Palestinian “resisters” from a West Bank town engaged in sometimes violent protests. That story followed another extreme anti-Israel piece, a March 9 column by Joseph Levine arguing that “one really ought to question Israel’s right to exist.”

The Times might have noted — but of course, did not — that the tally of fatalities in the past month alone in Syria exceeds the total number of Israeli and Palestinian lives lost during the four most active years of the second Intifada (September 2000-September 2004).