Secretary Hagel hosted Israeli Minister of Defense Ehud Barak yesterday at the Pentagon for his first meeting with a foreign counterpart since taking office as secretary of defense. Secretary Hagel expressed his strong commitment to Israel’s security, including maintaining Israel’s qualitative military edge and continued U.S. support for missile and rocket defense systems in spite of fiscal constraints.

Secretary Hagel and Minister Barak agreed that the United States-Israeli defense relationship has never been stronger than during the Obama administration and that both nations will continue this unprecedented close cooperation. 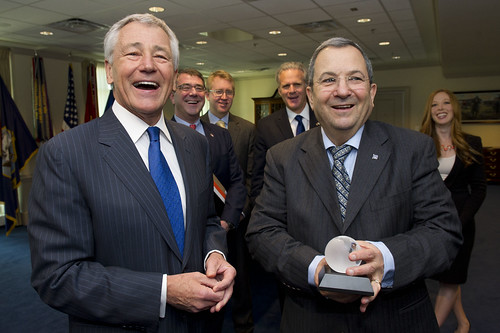 The leaders discussed the range of security interests shared by the U.S. and Israel, including the need for the Syrian regime to maintain control over chemical and biological weapons in their country; the leaders pledged to continue U.S.-Israel contingency planning to counter that potential threat.

Regarding Iran, Secretary Hagel reiterated that President Obama is committed to preventing Iran from obtaining a nuclear weapon with all options on the table. He stated that the United States continues to believe there is still time to address this issue through diplomacy, but that window is closing.

Secretary Hagel noted the two have had an outstanding working relationship dating back to Minister Barak’s days as prime minister and he thanked Minister Barak for his kind words at the American Israel Public Affairs Committee policy conference. Secretary Hagel expressed his desire to visit Israel soon and Minister Barak stated that Israel looks forward to hosting him in the near future.