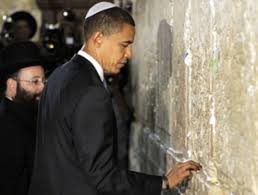 The National Jewish Democratic Council is thrilled to learn that President Obama will soon be visiting Israel. We are proud of the President’s unprecedentedly pro-Israel record and this upcoming trip will provide President Obama with yet another opportunity to affirm the unbreakable bond between the U.S. and Israel

Newly-confirmed Secretary of State John Kerry will also be visiting Israel in the coming weeks and we commend both the President and the Secretary for placing Israel and its security needs at the top of the Administration’s foreign policy agenda for President Obama’s second term.

More after the jump.
The Jewish Council for Public Affairs expressed hope that the trip would strengthen coordination on key strategic challenges facing the United States and Israel, including Iran’s nuclear program, Syria, and efforts to restart negotiations with the Palestinians. JCPA president Rabbi Steve Gutow said:

While Israel’s enemies continue to advocate strategies of boycotts and international isolation, President Obama will fly to the Jewish state this spring in a demonstration of the unbreakable bond between our two countries. The US and Israel share bedrock democratic values, as reflected in recent national elections, that are at the heart of our enduring friendship. President Obama’s trip, the first since his visit as a candidate in 2008, will send a strong signal to the Israeli people of U.S. commitment to their security in a troubled and volatile Middle East.

The announcement of this visit comes at a time of robust US-Israeli military cooperation and on the day that John Brennan, President Obama’s nominee to run the CIA, called for global action against Hezbollah, the terrorist organization responsible for the continued targeting of Israel’s citizens. We hope that the President’s visit will bring renewed vigor to the stalled peace process between Israel and Palestinian leadership, which is the only way to realize the goal of two states for two peoples.