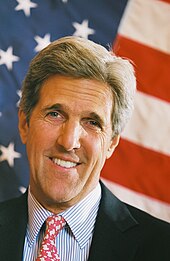 Secretary of State John Kerry spoke with Israeli Prime Minister Benjamin Netanyahu over the weekend. According to The Jerusalem Post:

New US Secretary of State John Kerry phoned both Prime Minister Binyamin Netanyahu and Palestinian Authority President Mahmoud Abbas on Sunday to discuss the diplomatic process, in an early sign he intends to make this a top priority on his agenda.

In both conversations he commended Netanyahu’s decision last week to release some NIS 400 million in tax revenues to the PA and praised it as a positive step.

A US State Department communiqué said that Netanyahu updated Kerry on his efforts to put together a new government.

The statement also said Kerry ‘underscored his personal commitment and that of President [Barack] Obama to support Israel’s security and to pursue a lasting peace between Israelis and Palestinians.’

Kerry and Netanyahu also spoke about Iran and Syria, and — according to the statement — pledged to work closely together during Kerry’s tenure.

It was reported that Kerry is planning to visit Israel in the coming weeks. JTA also noted that other high level meetings between Obama Administration and Israeli officials will take place this month:

Countryman will ‘meet with Israeli counterparts to discuss nonproliferation and international security issues of mutual concern,’ and Gottemoeller will ‘consult with senior civilian and military officials on pressing regional security issues and expanding our enduring strategic partnership’ and deliver remarks at a conference on nuclear nonproliferation, the statement said […].

The Israel Defense Forces in announcing the five-day visit by Gantz said it was ‘official […] as the guest of the Chairman of the Joint Chiefs of Staff, Gen. Martin E. Dempsey.’

In its statement, the IDF said the two generals would ‘discuss current security challenges, the regional security status in the Middle East and military cooperation.’