You are here: Home / Uncategorized / Prisoners of Preconceptions 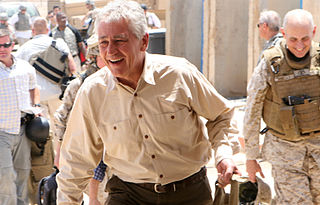 Even with protective cover from Senator Charles E. Schumer — as determined a defender of Israel as there ever was — and even speaking only for myself, I hesitate to address the overwrought reaction in some corners to President Obama’s nomination of Chuck Hagel for Secretary of Defense. I don’t want to be labeled an anti-Semite too.

Not that there wasn’t or isn’t cause for some concern about Mr. Hagel. He is famously on record as having once referred to AIPAC as the “Jewish lobby,” and in the past questioned the wisdom of too hastily employing military force against Iran. But such things — you might want to sit down — do not an anti-Semite or unconscionable isolationist make.

More after the jump.
At least not to reasonable eyes. Unfortunately, some tend to the visceral rather than the rational in such matters, prisoners of their own preconceptions. Despite the clear and ample evidence to the contrary, they just can’t stop pegging the president as less than committed to Israel’s wellbeing, and can be counted on to shoot at anything that moves if Mr. Obama set it into motion. So Mr. Hagel was immediately judged by some as bad for Israel, if for no other reason than that his nominator was the Dark Prince himself. Thus does circular reasoning attain its orbit.

A mindset is a terribly hard thing to move.

Mr. Hagel may turn out to be unsuited for the job of Defense Secretary. But that is a judgment to be made by Congress, based on the candidate’s testimony at his confirmation hearings — not by a trigger-happy pundit gallery.

Do Mr. Hagel’s critics even know what a Secretary of Defense does?

Hint: He does not make U.S. foreign policy. He oversees the operations of the military and, as part of the chain of military command, is answerable to the Commander in Chief. (Of course, that will hardly reassure those who choose to project their darkest fears onto Mr. Obama; cue the circular reasoning. And so, unfortunately, it goes.)

Particularly irksome is that the media has adopted the moniker “pro-Israel” for what would more accurately be characterized as pro-Likud.  Employing the phrase implies that, somehow, anyone who dares to wonder whether every building project in Israel is a geopolitically wise thing to do is somehow insufficiently concerned with the country’s future. But not every legitimate right is rightly acted upon. I can understand (although I’m no less irked for the fact) how a believer in Israel as a re-established Davidic Monarchy might see Israel’s thumbing its nose at the (admittedly largely unsavory) family of nations as some sort of religious imperative.  But that is not the approach of mainstream Orthodox Jewish theology — i.e. the teachings of the universally recognized Torah leaders of past generations and our own.

No, those interpreters of Judaism insist that the Messianic Age is yet to come, and counsel Jews as individuals to embrace modesty, and as a people to demonstrate a degree of deference to the nations of the imperfect world in which we float. Just as Jews in the Middle Ages or pre-Holocaust Europe had to pay (often distasteful but nonetheless necessary) homage to the nobleman or Czar, so do contemporary Jews bear a responsibility to take the feelings — yes, even unjustified, even hypocritical, even evil-fueled feelings — of the rest of the world into account. Even in a world with a Jewish state in the ancestral Jewish land, we are still in exile.

Maybe the Israeli right is right, and there’s a rational reason why contested population centers must be expanded, no matter what the United States or European countries say. Maybe there’s some larger-picture strategic need to do such things even if they alienate important global players, even Israel’s closest friends. But one thing is clear — or should be: Doubting those maybes, as all recent American administrations have done, is no sign of unconcern with Israel, and certainly not of anti-Semitism.

Senator Schumer spent some time with Mr. Hagel the other day, and emerged from their long conversation satisfied that the nominee’s views, both concerning Iran and Israel, are in consonance with his own. Mr. Hagel apologized for calling AIPAC a “Jewish lobby.”

To be sure, even if the nominee is approved, none of us can know the future. “In no man do I place my trust,” goes the prayer taken from the Zohar, advice for the ages. We cannot assume that even leaders who have demonstrated good will toward the Jewish people (or, today, the Jewish state) will always remain the same. But neither do we have the right to indulge in unwarranted panic attacks.

No question about it, it’s a dangerous world for Jews and for Israel. But that’s all the more reason for eschewing alarmism. We have all too many all too real enemies out there. What we really don’t need is to imagine, or create, new ones.

“It’s All in the Angle” (Torah Temimah Publications), a collection of selected essays by Rabbi Shafran, is now available from Judaica Press.