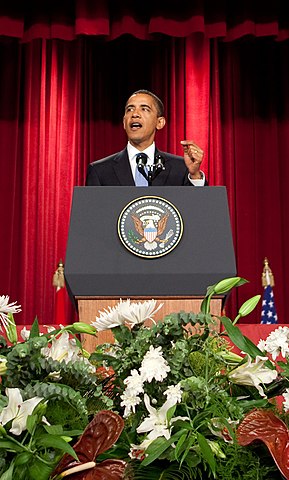 In a speech at the White House today President Barack Obama has announced a plan with 23 executive steps for reducing gun violence:

I’m putting forward a specific set of proposals based on the work of Joe [Biden]’s task force. And in the days ahead, I intend to use whatever weight this office holds to make them a reality. Because while there is no law or set of laws that can prevent every senseless act of violence completely, no piece of legislation that will prevent every tragedy, every act of evil, if there is even one thing we can do to reduce this violence, if there is even one life that can be saved, then we’ve got an obligation to try.

And I’m going to do my part. As soon as I’m finished speaking here, I will sit at that desk and I will sign a directive giving law enforcement, schools, mental health professionals and the public health community some of the tools they need to help reduce gun violence.

We will make it easier to keep guns out of the hands of criminals by strengthening the background check system. We will help schools hire more resource officers if they want them and develop emergency preparedness plans. We will make sure mental health professionals know their options for reporting threats of violence — even as we acknowledge that someone with a mental illness is far more likely to be a victim of violent crime than the perpetrator.

More after the jump.
In response, B’nai B’rith International has issued the following statement:

B’nai B’rith International praises President Obama for his plans to introduce a legislative package next week that, among other things, would include reinstating the assault weapons ban, limiting the number of rounds in ammunition magazines, implementing universal background checks for those purchasing firearms and enacting new gun trafficking laws.

B’nai B’rith calls on both parties in Congress to work with the administration to swiftly pass effective gun legislation.

The shooting at an elementary school in Newtown, Conn., a month ago and several other gun related tragedies in recent years have demonstrated a growing need for reform of the nation’s gun laws.

Following the shooting at Sandy Hook Elementary School, B’nai B’rith was quick to call on the president and Congress to reinstate the assault weapons ban, believing there is no sane, acceptable, reasonable need in a civilian setting to fire off large rounds of ammunition.

On Jan. 14, the B’nai B’rith International Executive Committee passed a formal resolution that called for a ban on assault weapons, as well as a limit on ammunition magazine capacity.

This country needs meaningful, bipartisan gun regulation. B’nai B’rith pledges to work with all political parties, interest groups and coalitions to make these regulations a reality.

“We thank President Obama and Vice President Biden for these thoughtful and comprehensive proposals to prevent gun violence in America,” said Rabbi Steve Gutow, president of the Jewish Council for Public Affairs.

We recognize that this is a complex issue. In the month since 26 first graders and educators were murdered at Sandy Hook Elementary, over 900 Americans have lost their lives from gun violence. The memory of Newtown is still fresh, and so is Aurora, Tucson, Fort Hood and other massacres that remind us that something must be done — and that there isn’t a single solution to preventing mass violence. We appreciate the Administration’s understanding that there are multiple causes which must be addressed. It is crucial that passions not ebb nor our country return to complacency. Gun violence claims new lives every day. We encourage the President to continue to move this conversation forward during his State of the Union address, keeping the protection of Americans front and center. As a community that has experienced mass violence, we appreciate the careful consideration that is being given to this issue. It is a national priority and we must keep up the momentum.

JWI applauds President Obama’s bold leadership on reforming gun laws in an effort to reduce gun violence in our nation. JWI has pledged its commitment to support the banning of assault rifles and high-capacity magazines as well as strengthening and expanding background checks for gun purchasers. The executive orders announced by the President will give us added tools and strategies to further gun violence prevention. JWI calls on Congress to follow the President’s lead by enacting effective legislation.

As an organization that works every day to prevent violence against women and girls, we have seen all too often the devastating effects of gun violence. We and our network of more than 25,000 pledge to work with the Administration to make gun violence prevention a priority for the country. This issue will be of primary importance to JWI throughout the 113th Congress, and we hope for quick passage of gun laws to curb gun violence.