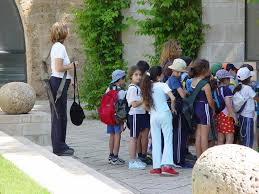 I’ve been in Israel dozens of times and accompanied my grandchildren to their elementary schools and high schools and not once did I see a teacher packing heat. There may be rare exceptions as in the case of disputed territories, but that does not negate the rule that teachers do not carry guns in the classroom. However there is an armed security guard at the gate of every school.

A picture has recently gone viral, portraying a teacher with a rifle slung over her shoulder protecting her students on a class trip. That photo is a misrepresentation and cynical distortion of the truth in order to further a pro-gun agenda. The woman in the picture is in fact an armed security guard, a former member of the Israel Defense Force and well trained in the use of firearms. All school sponsored class trips are protected in that way because the enemies of Israel target school children first; because that’s what terrorists do. They prey on easy targets while instilling the maximum amount of terror in the general population.

Although under the Second Amendment, in the United States we have the ‘right to bear arms’, in Israel there is no such right. In Israel it is a privilege. Granted hunting is rare in Israel so there is not the same demand for weapons as there is in the United States. Nevertheless, even if hunting were popular in Israel, you could not buy a pistol or rifle at a gun show or from a gun collector, as is the case here in the US. Assault rifles are banned, except for those who live in the disputed territories where they are under attack almost on a daily basis. And if perchance you do have a permit to carry a pistol, a privileged accorded only to those who have served in the IDF with a rank of captain or higher, you are permitted just one pistol, not an arsenal.