You are here: Home / Uncategorized / Heard At The Electoral College 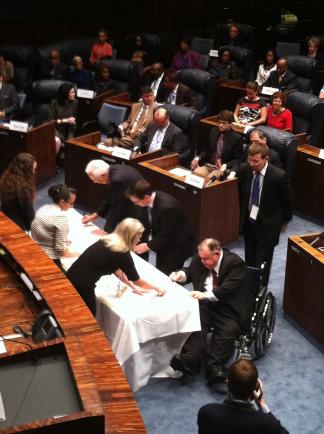 Members of the electoral college met today in all fifty state capitals and the District of Columbia to officially cast their votes for President and Vice-President of the United State. Here are some highlights from Pennsylvania, Florida and Arizona.

“What! No write-in votes for me?” — State Senator Daylin Leach (D-PA). 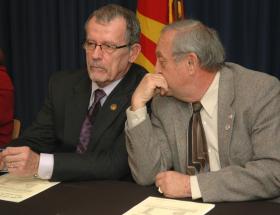 Arizona Public Radio reports that the state’s electors cast their ballots for Romney — but not before three of them said questions remain about whether Barack Obama was born in this country. “I’m not satisfied with what I’ve seen. I think for somebody in the president’s position to not have produced a document that looks more legitimate, I have a problem with that.” — State Party Chairman Tom Morrissey (R-AZ)

According to the Los Angeles Times:

More than five weeks after election day, almost all the presidential votes have been counted. Here’s what the near-final tally reveals: The election really wasn’t close.”

In the weeks since the election, as states have completed their counts, Obama’s margin has grown steadily. From just over 2 percentage points, it now stands at nearly 4. Rather than worry about the Bush-Kerry precedent, White House aides now brag that Obama seems all but certain to achieve a mark hit by only five others in U.S. history – winning the presidency twice with 51% or more of the popular vote