You are here: Home / Uncategorized / New York Times and Ha’aretz Get An F In E-1 Geography 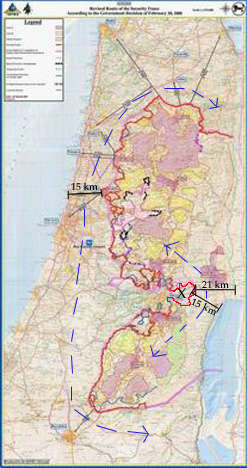 With Israel’s announcement that it plans to proceed with construction in Area E-1, east of Jerusalem, earlier falsehoods about that land reemerge. Thus, Ha’aretz reports that construction in E-1

would effectively bisect the West Bank and sever the physical link between the Palestinian territories and Jerusalem.

Construction in E1, in West Bank territory that Israel captured in the 1967 war, would connect the large Jewish settlement of Maale Adumim to Jerusalem, dividing the West Bank in two. The Palestinian cities of Ramallah and Bethlehem would be cut off from the capital, making the contiguous Palestinian state endorsed by the United Nations last week virtually impossible.

So is it true that construction in E-1 would bisect the West Bank, and severing Palestinian contiguity, and cutting off Palestinian areas from Jerusalem? The answer is no. As CAMERA pointed out in 2005 (The Contiguity Double Standard):

Palestinian contiguity in the West Bank would be no more cut off with the so-called E-1 corridor than would Israeli contiguity if Israel were to withdraw to its pre-1967 borders, even with slight modifications.

Here’s why. First, take a look at this map of the region.

More after the jump.
As CAMERA earlier explained:

The black X marks the approximate location of the new neighborhood near Ma’aleh Adumim. To the west of the X is Jerusalem. The red line surrounding the X is the planned route of the security barrier, which will encircle Ma’aleh Adumim and Jerusalem.

Those who charge that Israeli building in Ma’aleh Adumim severs north-south contiguity disregard the fact that Palestinian-controlled areas would be connected by land east of Ma’aleh Adumim (marked on the map) that is at its narrowest point ~15 km wide.

Moreover, Israel proposes to build tunnels or overpasses to obviate the need for Palestinians to detour to the east through the corridor.

Ironically, many of those who argue for greater contiguity between Palestinian areas, at the same time promote Israeli withdrawal to its pre-1967 boundaries, which (even with minor modifications) would confine Israel to a far less contiguous territory than that of the West Bank. As shown on the map above, there is a roughly 15 km wide strip of land separating the Green Line (and the Security Fence) from the Mediterranean Sea (near Herzliya). Also shown is the circuitous route necessary to travel via this corridor between northern and southern Israel. (e.g. from Arad to Beit Shean.)

Nor is it true that the construction would cut off Palestinian areas from Jerusalem. Access to Jerusalem through Abu Dis, Eizariya, Hizma and Anata is not prevented by the proposed neighborhood, nor would it be precluded by a string of neighborhoods connecting Ma’aleh Adumim to Jerusalem.