You are here: Home / Uncategorized / “STARS OF DAVID” Charms at Philadelphia Theatre Company

There were two reasons why I was pre-disposed to enjoy “Stars of David,” the original musical production at the Philadelphia Theatre Company’s Suzanne Roberts Theatre in Philadelphia.  First, Brad Oscar was one of the stars, and I had seen him in action when he starred in the Broadway version of “The Producers,” some years ago.  Oscar played the Nazi playwright who had penned the mythical “Springtime for Hitler” and was nominated for a Tony Award for his memorable performance.  His “mishpokhe” drove in from Washington to enjoy his opening night performance.

And second, although I never met author Abigail Pogrebin, I had served on the national governing council of the late lamented American Jewish Congress with Abby’s mother, Letty Pogrebin, another talented writer.

of interviews with famous Jewish people, as well as the musical version which takes fourteen of her interviews and turns them into sketches with song.

My husband has a word for Jewish geniuses: “Jewnius.”  And that’s what the collection of songwriters and scriptwriters must be called, working from Abby Pogrebin’s book

of interviews with dozens of accomplished Jewish professionals.

Abby asked each person what they thought about being Jewish.  Some were totally comfortable with their Jewish heritage.  Others had denied their Judaism for much of their lives.  In other words, we see a cross-section of American Jews, and everyone in the audience could relate to at least one or two of the characters singing their hearts out on stage.

Particularly moving was Alex Brightman’s rendering of “Lenny the Great” – the mini-bio of Leonard Nimoy, of “Star Trek” fame.  Seems Nimoy was a magician early in life – until an anti-Semitic magic store owner cheated him, substituting anti-Semitic tracts in a case which was supposed to hold Nimoy’s longed-for magic tricks. 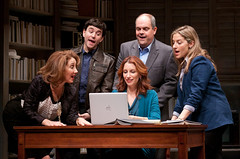 The stories revealed are touching and moving and funny and dramatic, and the five Broadway calibre actors, including Brad Oscar, backed by an unseen orchestra, are highlighted by a set which often has slides and video of the characters being represented.

You will certainly remember the Ruth Bader Ginsburg vignette and lament, with her remembrance of heartbreak when she was barred from the minyan saying kaddish for her mother.  Sam Davis, the musical supervisor who is responsible for the orchestrations and arrangements, works his magic.

You don’t have to be Jewish to enjoy “Stars of David” – I tested my theory on opening night, approaching several young African American professionals who were guests of a Philadelphia Theatre Company board member.  They loved the show.  I forgot to ask them if they needed to refer to the program’s dictionary of Yiddish and Jewish Terms.

Aaron Sorkin and Tony Kushner and Gloria Steinem, Joan Rivers and Kenneth Cole, are among the other stars portrayed on stage in lively and delightful scenes.  Charles Busch’s “script” weaves together the talents of leading lights of the American music scene, totaling a thoroughly delightful evening at the theater.

You will recognize the names of some of the Honorary Producers listed in the playbook, including Philadelphia Jewish Film Festival sponsors Nancy and David Colman, Phyllis and Howard Fischer, and Barbara and Mickey Black.  Go.  Enjoy!

Bonnie Squires is one of the founders of The Philadelphia Jewish Voice and its current president, and continues to edit its society column. She is the president of Squires Consulting, and is a Phi Beta Kappa alumna of the University of Pennsylvania with a Master's degree in English Literature. At Temple University, she was an assistant to the president, assistant secretary of the board of trustees, editor of Temple Magazine, and executive director of the capital campaign. She is active in politics and is a board member of ADL, HIAS, and JAFCO (Jewish Adoption and Foster Care Options). She was inducted into the Best 50 Women in Business in Pennsylvania and the Philadelphia Public Relations Association Hall of Fame.