You are here: Home / Uncategorized / Thanksgiving: A Celebration Of Cranberries 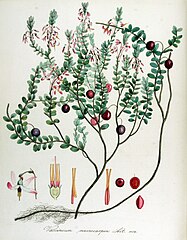 “How do you say cranberry in Hebrew?” my children asked me.  I was stumped.  I had never heard of cranberries before I moved to the United States.  “Maybe “cranberry” with a Hebrew accent?” I suggested.  I looked it up to be certain.  Modern Israeli Hebrew is a revived language, in which new names are constantly being adopted for things that did not exist in Ancient Israel.  The Hebrew name selected for “cranberry” by the Academy of the Hebrew Language is “chamtzitz.”  To me, “chamtzitz” refers to any sour wild plant.  In order to learn more about this Native American fruit, we decided to experience the cranberry harvest in New Jersey.

Our Thanksgiving celebration began in mid-October with a visit to Double Trouble State Park‘s cranberry harvest.  This beautiful park is located in New Jersey’s Pine Barrens.  Oxycoccus macrocarpus is one of three fruits native to North America.  The other two are blueberries and Concord grapes.  The Leni Lenape called this berry “ibimi” or “bitter berry.”  For them, the cranberry was a symbol of peace.  The Pilgrims named it “crane berry” because they thought that the cranberry blossoms looked like cranes.  With time, this name was shortened to “cranberry.”  After the American Revolutionary War, cranberries began to be cultivated.  They were exported to Northern Europe, where they became very popular.   These evergreen vines are planted in peat bogs.  Historically, cranberries were picked by hand.  The most cost-efficient way to harvest them is by flooding the bog.  The ripe berries float to the surface.  At the Double Trouble State Park, we saw farmers dressed in waterproof rubber clothes vacuuming the ripe cranberries from the surface of the bog.  It was a wonderful visit, and the whole place looked like a beautiful impressionist painting with shades of green, red, and gold.

What did we make with the rest of the cranberries?  Another Native American specialty: dried cranberries. 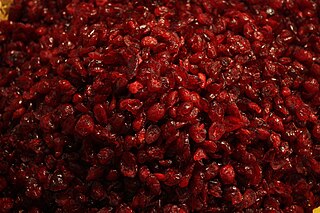 As I celebrate my adopted holiday of Thanksgiving, I will honor the Native Americans and Pilgrims by preparing the cranberry sauce that they savored together in 1621 at Plymouth Plantation.  I like to say a blessing from my tradition to express my gratitude on this day:

Blessed are you, L-rd, our G-d, sovereign (or king) of the universe who has kept us alive, sustained us, and enabled us to reach this season.