You are here: Home / Uncategorized / An Etrog Tree Grows in Lower Merion 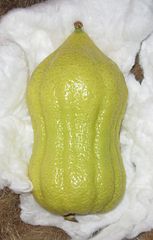 It’s hard to grow fruit organically in Pennsylvania, because we’re fortunate to get plenty of rain.  So, farmers have to resort to using pesticides at less-sensitive times (such as before the flowers bloom) or Integrated Pest Management (IPM, which involves the judicious application of cooperative bugs). The beautiful etrogim (citron fruit) that Jews buy for the celebration of Sukkot are often laced with pesticides, so caveat emptor! You should not use them blithely in food preparation afterwards. Therefore, I was delighted to learn of a local man who’s been dedicated to growing etrog trees, and, after about seven years of experimentation, he’s succeeded in nurturing trees that bear fruit.

Last year, Tablet published an article about a Presbyterian man, John Kirkpatrick, in California who is the only large-scale farmer of etrogim in the United States. Last month, the Jewish Telegraph Agency published an article on Matt Bycer, a Jew in Arizona who now raises about 200 trees. Working independently, Stephen Asbel of Lower Merion has been raising etrog trees for his own pleasure.

Stephen Asbel works as a lawyer (and has written for the Philadelphia Jewish Voice), but he has a passion and a green thumb for the etrog. After much experimentation, he now germinates them on the radiator in the dining room. Once the sprouts poke through the soil, he moves them to the sunny windowsill in the kitchen. He used to use grow lights in the basement — so many, says his wife, Lenore, that she worried that the police would raid them on suspicion of illegal horticulture!

During the warm months, he transplants them to moveable pots and brings them outdoors. However, the Pennsylvania winters are too harsh for the plant that hails from the Mediterranean (Greece, Israel, Italy, Morocco, and Yemen), so he brings them indoors. It’s important to not over-water the trees, so he lets the soil dry out between waterings. A successful strategy is the application of Dr. Earth’s Fruit Tree Fertilizer

, about every three months.

A challenge for these trees growing indoors is the dryness of our homes, especially during the winter months when we use central heating.  The dry air renders the trees susceptible to spider mites. Stephen hoses down the plants when they’re outdoors and he routinely mists them when they’re indoors. The Asbel home — perfect for their family — is not large enough to house all the healthy trees he’s been able to bring to maturity. To my delight, when I called them to ask about getting a tree for my family, he was agreeable. After all, just as the proud guardian of new puppies from a beloved family pet, he wanted just the right kind of caretaker for his arboreal babies. Lenore delivered my tree yesterday and I’m super excited about making etrog jam, if not etrog vodka, in the future.

I now want to name my tree, but I am stumped for a suitable name, as the species is botanically both male and female, which means it can pollinate itself. Stephen pointed out that the etrog is not mentioned as such in Tanach, only pri etz hadar (fruit of the majestic tree), so he suggests that I name my tree Hadar. I love it, but my husband says not to name it until the tree survives a month in our home.