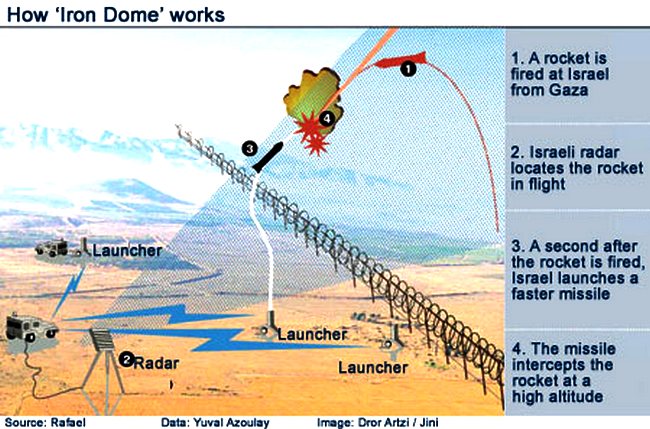 The following assertion has been up occasionally in the conservative blogosphere: That Iron Dome, the system that successfully defended Israel from a recent spate of Gaza-based rocket attacks, was launched under the aegis of President George W. Bush.

But that turns out not to be correct. In fact, Obama more or less owns U.S. backing for Iron Dome.

Conservatives who make the claim seek to undercut another recurrent meme peddled by pro-Israel Democrats, that President Obama’s decision to underwrite the project is evidence of his pro-Israel bona fides (Obama earmarked $205 million for Iron Dome above and beyond the $3 billion average that Israel gets in defense assistance each year, and Leon Panetta, the defense secretary, is working with lawmakers in Congress who want to appropriate more for additional batteries.)…

A Congressional Research Service report in March (PDF) assessing foreign aid to Israel squarely attributes funding to Obama. (The Iron Dome chapter starts on p. 10 and an illustrative chart is on p. 15.)

In March 2010, the Obama Administration announced that it would support $205 million in defense assistance to Israel for the purchase of up to ten Iron Dome batteries.

Israel began developing Iron Dome in 2005 and it became a priority in 2007, but there’s no evidence that Bush gave funding for the project an advance nod. The Pentagon spokesman in this May 2010 Reuters report pegs the funding decision to the fall of 2009, when Obama was president.