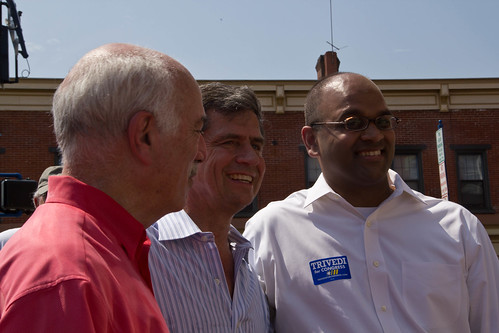 (Malvern, PA, 6/28) Democracy for America, a national political action committee with over a million members, today endorsed Dr. Manan Trivedi, Democratic candidate for Congress in Pennsylvania’s 6th Congressional District. On behalf of the national organization, Montgomery County chapter president, Beverly Hahn presented Trivedi with a contribution of $2500. “Manan’s distinguished record of service as a combat surgeon in Iraq, and his service to the community as a primary care physician, give him special insight into the application of military force, the consequences of foreign policy, the problems of medical care financing and insurance, and the difficulties facing small business in this troubled economy,” noted Hahn. “We heartily endorse Manan, over his Republican opponent.”

Former Congressman Joe Sestak, who bested Arlen Specter for the Democratic Senate nomination in 2010, was also on-hand to endorse Trivedi, and to build enthusiasm for Trivedi’s campaign.   Sestak, who rose to the rank of admiral in his own naval service, spoke to Trivedi’s teamwork and sacrifice, voicing his support for President Obama and the entire Pennsylvania Democratic ticket.

More after the jump.
Democracy for America (DFA) is a grassroots powerhouse working to change our country and the Democratic Party from the bottom-up. We provide campaign training, organizing resources, and media exposure so our members have the power to support progressive issues and candidates. The national organization’s website invites citizens across the nation to join a true grassroots movement, unbought and truly independent. Montgomery County Democracy for America meets monthly at the Jenkintown Public Library, 460 Old York Road, Jenkintown, PA, on the first Thursday of each month.