You are here: Home / Uncategorized / Shavuot Centerpiece: The Savory Cheesecake 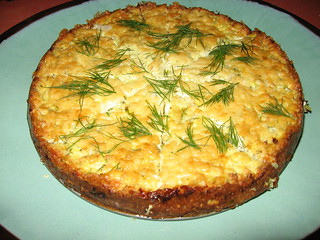 Traditionally, Shavuot is celebrated with sweet cheesecakes and blintzes, redolent of cinnamon, raisins, and sugar.  It is what we eat as we celebrate the giving of the Torah at Sinai.  The basic unsweetened cheesecake is a neutral palette.  It invites creativity!  Many cultures have a tradition of preparing savory cheesecakes.  For this year’s celebration, surprise your guests with something a little out of the ordinary.  Prepare a piquant cheesecake for a special holiday treat.

More after the jump.
The Ancient Greeks are credited with inventing the cheesecake.  Archaeologists discovered cheese molds from 2000 BCE on the island of Samos.  In Ancient Greece, cheesecake was prepared for Olympic athletes.  The most ancient recipe for cheesecake was written down by the Greek physician Aegimus.  The ingredients for his cake were cheese, honey, and flour.  He instructed cooks to pound the cheese and honey together with a mortar and pestle.  Flour was to be added to form a type of batter.  The resulting dough was baked in a wood-burning oven.  This cheesecake was believed to give the athletes energy.

In 146 BCE Rome conquered Greece.  The Romans adopted the cheesecake, and added a few special touches to it.  They mixed the cheese with eggs, and lined the baking vessel with fresh bay leaves.  Marcus Cato, a Roman politician, was the first to record a recipe for this cake called libum.  Below is an excerpt from his agricultural writings in which he explains how to prepare libum.

“Libum to be made as follows: 2 pounds cheese well crushed in a mortar; when it is well crushed, add in 1 pound bread-wheat flour or, if you want it to be lighter, just 1/2 a pound, to be mixed with the cheese. Add one egg and mix all together well. Make a loaf of this, with the leaves under it, and cook slowly in a hot fire under a brick.”

The Romans spread the cheesecake throughout their empire.  Each new place added its own special touch to the recipe, transforming it.  Today there are many cheesecake recipes from all over the world.  Here are some savory cheesecake recipes you may prepare for your degustation this Shavuot. 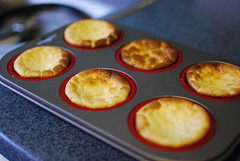 Stilton Cheesecake
Adapted from My Recipes