You are here: Home / Uncategorized / Obama Admin. to Provide Israel with $70M for Iron Dome 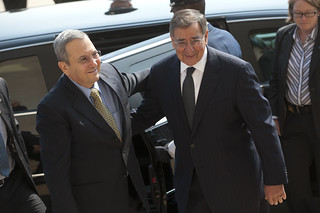 Defense Secretary Leon Panetta hosted Israeli Defense Minister Ehud Barak at the Pentagon today for bilateral discussions focused on Israel’s security and Iran. Panetta announced during the meeting that the Obama Administration will be providing Israel with an addition $70 million in funding for the Iron Dome missile defense system, which is in addition to the $205 million previously given.

Panetta’s statement and reaction from JTA after the jump.
Panetta said in a statement:

The level of security cooperation between the United States and Israel has never been stronger. One important example of this cooperation is U.S. support for Israel’s Iron Dome short range rocket and mortar defense system.

I was pleased to inform Minister Barak that the President supports Israel’s Iron Dome system and directed me to fill the $70 million in assistance for Iron Dome that Minister Barak indicated to me Israel needs this fiscal year.

My goal is to ensure Israel has the funding it needs each year to produce these batteries that can protect its citizens. That is why going forward over the next three years, we intend to request additional funding for Iron Dome, based on an annual assessment of Israeli security requirements against an evolving threat. This is part of our rock solid commitment to Israel’s security and comes on top of approximately $3 billion in annual security assistance for Israel.

The U.S. has already provided $205 million in assistance for that system, and operational batteries have already proven effective in defending against rocket attacks on Israel earlier this year. Iron Dome has already saved the lives of Israeli citizens, and it can help prevent escalation in the future.

Minister Barak and I have been discussing additional U.S. support for Iron Dome, and in recent months our departments have been working closely to gauge Israel’s security needs and production capacity for that system.

Legislation under consideration in Congress, shaped in consultation with administration officials, would deliver $680 million to Israel for the system, which earlier this year successfully intercepted rocket fire from the Gaza Strip.

The system was funded in part by $205 million transferred by the United States to Israel in 2011.

Barak in a statement said he ‘greatly appreciated’ the announcement, adding that ‘This additional funding for the Iron Dome system comes at a crucial time for the Israeli people.’

Barak is in Washington to discuss with Panetta and Secretary of State Hillary Rodham Clinton efforts to keep Iran from obtaining a nuclear weapon….

Israel would likely seek to shore up its defenses against attacks on its borders ahead of any conflict with Iran, as Iran would be likely to pressure surrogates in the Gaza Strip and Lebanon to attack.

‘This funding will enable the Jewish state to better protect its citizens, thus preventing a wider conflict,’ AIPAC said in a statement. ‘Missile defense programs are a cornerstone of U.S.-Israel cooperative programs. The two allies work together to develop innovative technologies that advance the security of both nations.’