You are here: Home / Uncategorized / Friends of the IDF: Having An Impact and Changing Lives

Have you ever wondered what people talk about in a bomb shelter during a war?  I found out in 1973.   The Yom Kippur War was raging around me.  My father was away, fighting on the Syrian front. In the middle of the night, the air raid sirens were sounded.  My mother, brother, and I stumbled down the stairs to the bomb shelter of our building.  Our neighbors were having a tempestuous discussion about the stupidity of the design of our air raid retreat.  One neighbor had the last word when he commented, “even if we survive a direct hit, our building’s propane tank is here with us.  It will explode, killing us instantly!”  I sat with them, watching over my infant brother and thinking about my dad.  We had no way to communicate with him.  I also thought about another neighbor who was on the front, a fighter pilot.  The next day we got the terrible news: our fighter pilot had been shot down.  He was killed in action.  His father, Albert, owned the grocery store on our street.  I adored Albert!  One month later, his grocery store was locked, and a notice had been glued to the door.  Albert had died.  “Of a broken heart,” I was told.  “Once his son died, he had nothing to live for anymore.”  At that moment, my five-year-old heart shattered as well.  I never forgot Albert or his brave son.  A few months later the Yom Kippur War ended, and my family was sent to Venezuela. 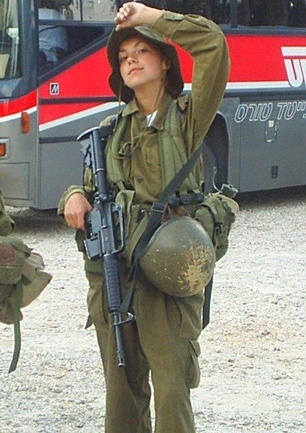 Thirteen years later, I left my family behind, and flew fifteen hours from Venezuela to Israel.  I did this so I could volunteer to serve in the IDF as a Lone Soldier.  At the concluding ceremony of my basic training, tears rolled down my cheeks as I swore over my Uzi machine gun and Torah to protect the State of Israel.  Albert and his son were in my thoughts.

It has been twenty-four years since I was honorably discharged from my military duty.  I have been busy with studies, building a family, and living my life.  My oldest daughter, Devorah, was born and raised in Philadelphia.  This year, she spent a semester in Israel at the Alexander Muss High School.  It was a transformational experience!  “Everything I did was full of meaning and purpose!” she shared with me.  As a result, she has decided to volunteer to serve in the Israel Defense Forces.

Devorah will also be a Lone Soldier.  She will be in good company.  According to Major General (Ret.) Yitzhak (Jerry) Gershon, national director of the Friends of the Israel Defense Forces, last year there were 2,500 lone soldier volunteers in the IDF.  Forty percent of them came from North and South America, forty percent from the former Soviet Union, and the rest from Europe.

As I proudly watch Devorah make her own choices and take off, I want to do something to help her and all the other soldiers in Israel.  What can I do when I live in Philadelphia?  I can support them through the Friends of the Israel Defense Forces. The FIDF is an American nonprofit organization whose mission is to help Israeli soldiers, and the families of fallen soldiers.  It is a community of Zionists who are passionate about Israel.

The FIDF supports bereaved families by sponsoring summer camps, trips, workshops, and gifts for widows and orphans.  Lone Soldiers are helped with FIDF sponsored flights home to visit their family.  IDF soldiers who serve in combat units and demonstrate financial need are offered scholarships for a college education in Israel.  The FIDF is paying for medical training in its IDF Medical School.  Clubs, libraries, gyms, canteens, synagogues, and well-being centers are being built by the FIDF for soldiers to enjoy during their military service.

Our local Philadelphia chapter of the FIDF just elected its first board.  There are many opportunities to be a part of this community.  The FIDF is the perfect organization for a Bar or Bat Mitzvah project.  The Young Leadership Division is appropriate for college graduates.  It is a great place for those who enjoyed the Birthright program, and wish to maintain and strengthen their connection to Israel. During the course of the year the FIDF sponsors opportunities to meet with Israeli soldiers, enjoy IDF musical ensemble performances, gala dinners, and missions to Israel.  You can check their website to see what appeals to you most.  I intend to become very involved in this organization.  I invite you join me.