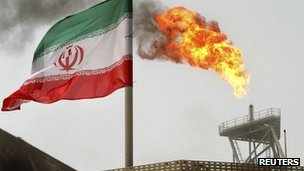 After careful analysis and examination, President Barack Obama has issued a vital determination today regarding the oil supply on world markets-paving the way for further harsh sanctions targeted against Iran’s oil industry. Today’s announcement marks the latest major step that this President has taken to prevent a nuclear-armed Iran, and we are truly grateful for his decisive action.

As the President recently said, ‘all elements of American power’ are on the table to stop Iran- including ‘crippling sanctions’ like the ones he is strengthening today, as well as the potential military option that he has regularly cited. His Republican critics-who have done little beyond criticizing and engaging in outright lies about the President’s record, while offering no responsible alternatives-should take note: President Obama is responsibly spearheading the global movement against Iran’s nuclear weapons program. At least surrounding this one critical issue,  GOP partisans should cease placing politics above America’s and Israel’s security immediately.

By the authority vested in me as President by the Constitution and the laws of the United States, after carefully considering the report submitted to the Congress by the Energy Information Administration on February 29, 2012, and other relevant information, and given current global economic conditions, increased production by certain countries, the level of spare capacity, and the existence of strategic reserves, among other factors, I determine, pursuant to section 1245(d)(4)(B) and (C) of the National Defense Authorization Act for Fiscal Year 2012, Pub1ic Law 112-81, that there is a sufficient supply of petroleum and petroleum products from countries other than Iran to permit a significant reduction in the volume of petroleum and petroleum products purchased from Iran by or through foreign
financial institutions.

I will closely monitor this situation to assure that the market can continue to accommodate a reduction in purchases of petroleum and petroleum products from Iran.

The Secretary of State is authorized and directed to publish this memorandum in the Federal Register.