You are here: Home / Uncategorized / Letter to a Prisoner 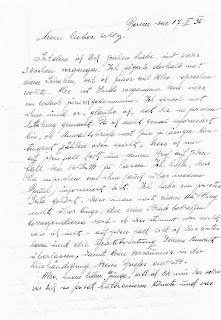 The archivist at Brandenburg found, among the legal documents, a personal letter to my father from a friend of his, Oskar Gellman, dated January 17, 1936, with an extra note by Erna, whom I assume to be his wife.

His friend not only decided to appraise him of the mundane events of his acquaintances during the time her was in prison, but also to entertain him and keep his spirit up. Why the wardens would have kept just this letter, I have no clue, but the writer is so very vivid and ascerbic in his wit, that perhaps they kept it as an example of how funny these Jews could be. His writing verges on the Rabelaisian and he pokes sharply at his friends and acquaintances.

It is a window on the mood of Jews in the early years of  the Hitler reign, as the Nuremberg laws were taking effect while the ultimate horror  awaiting them was something as yet unimagineable…