You are here: Home / Uncategorized / No Second Place Winners, Just Voters and Votes 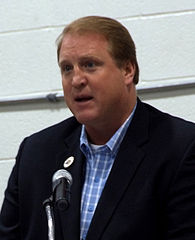 America devotes a lot of time and money to the idea of democracy. We promote it at home, and teach the concept to our schoolchildren. Our military bravely defends it abroad.

In a democracy, whomever gets the most votes wins the election. I was elected Governor of Iowa with the most votes. That’s the way we elect senators. The same is true for dogcatchers. The winner wins in every election in the United States, with one exception: the election of the leader of the free world.

In American history, candidates have won a majority of the Electoral College (and hence the White House) without winning the most popular votes in 4 of the nation’s 56 presidential elections. That’s 1 in 14 times. If car companies had this sort of failure rate, you’d never get behind the wheel.

But the big picture is worse, thanks to “near miss” elections. Everybody remembers the 2000 election where Al Gore won the popular vote nationally but lost Florida by ruling of the U.S. Supreme Court. But we tend to forget the night of the 2004 election, when the presidency came down to Ohio. A shift of 60,000 votes in that state in 2004 would have given the Electoral College majority vote to John Kerry despite President Bush’s nationwide popular vote lead of 3,000,000 votes.

Landslide elections, in which the vote margin is sufficient to render the whole question moot, are increasingly infrequent. The electorate is fragmented and polarized, and close presidential elections are likely to become the norm. That means more second place winners.

This likely explains why more than 70% of voters support a system that guarantees the presidency to the winner of the overall popular vote.

Fortunately, the National Popular Vote Plan just does that.

Under this state-based plan, states will award their electoral votes to the winner of the popular vote in the entire United States. The U.S. Constitution gives state legislatures the power to fix our broken system. According to Article II, section 1, states have exclusive control over the manner of awarding their electoral votes.

The plan would do away with the winner-take-all system, currently in use by 48 out of 50 states (Nebraska and Maine being the two exceptions). In addition to causing second-place winners, the system makes some votes hundreds of times more important than others, and causes non-battleground states to be ignored.

The National Popular Vote Bill has been introduced in all 50 state legislatures. (In Pennsylvania, it is Senate Bill 1116 and House Bill 1270.) The bill would take effect only when enacted by states possessing a majority of the electoral votes; that is, enough electoral votes to elect a President (270 of 538).