You are here: Home / Uncategorized / “Friendship Blossoms” Between Romney and Anti-Israel Paul 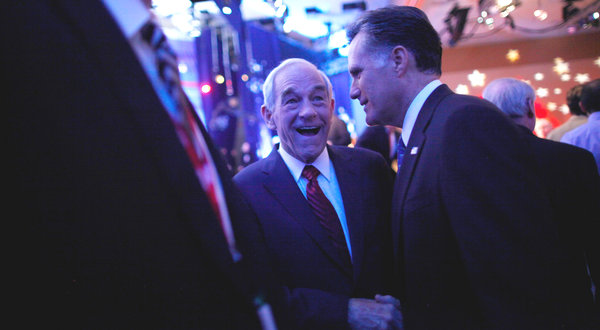 As we’ve noted previously, former Massachusetts Governor Mitt Romney and Texas Representative Ron Paul have grown quite close on the campaign trail. Many believe that Romney will need Paul’s support to win the Republican nomination, and Romney has told CNN’s Wolf Blitzer that he would vote for the anti-Israel Paul if he were the nominee. Several weeks ago, The Washington Post reported on the “strategic partnership” that the two candidates have formed.

According to NBC News:

With Santorum potentially on the brink of upsetting Romney in Michigan next week, the Paul campaign is targeting the former Pennsylvania senator for what it says is hypocrisy — after Santorum criticized Romney on the 2002 Winter Olympics.

In a Republican presidential contest known for its angry rivalries, the Romney-Paul relationship stands out for its behind-the-scenes civility. It is a friendship that, by Mr. Paul’s telling, Mr. Romney has worked to cultivate. The question is whether it is also one that could pay dividends for Mr. Romney as he faces yet more setbacks in his struggle to capture the 1,144 delegates needed to win the nomination.

Ideological similarities among supporters of Rick Santorum and Newt Gingrich suggest that if Mr. Gingrich dropped out, many of his backers would coalesce behind Mr. Santorum. But as Mr. Paul steadily collects delegates, one thing that remains to be seen is whether his affinity – at least on a personal level – for Mr. Romney could help the former Massachusetts governor as the fight drags on…

“I talk to Romney more than the rest on a friendly basis,” Mr. Paul said. “I throw Romney’s name out because he’s made a bigger attempt to do it. The others are sort of just real flat.”

In an interview on CBS this past weekend, Mr. Paul volunteered that since his rivals were largely identical in policy substance, “when it comes down to those three, it’s probably going to be management style more than anything else.” According to one person close to the Paul campaign, it would be accurate to infer from that phrasing — “management style” — that Mr. Paul has a willingness to listen to overtures from Mr. Romney, who has been trying to sell himself to voters as a proven manager.