Yet another Republican caucus victory may be slipping out of Mitt Romney’s hands.

The vote in Maine seems like deja vu all over again. “Final results” are announced showing Romney with a narrow victory. This time Rep. Ron Paul (R-TX) was the runner up trailing by 196.

Paul and Romney were the only two candidates to actively campaign in the Pine Tree State.

Just as in Iowa, the narrow result is in doubt because many important precincts were left out including all of Washington County and Waldo County (shown in green on this map of Maine) as well as Waterville in Kennebec County just West of Waldo.

Moreover, the result in question is the “Presidential Preference Straw Poll”. As in Iowa, this poll is really just for bragging rights. The actual nominee is selected by the state delegates who are determined at the end of the long caucus meeting. This generally gives an important.

Paul, in a defiant speech, claimed the contest could essentially be called a tie, adding that “the revolution is just beginning.” He sounded confident that he will eventually win the majority of the state’s delegates.

According to Nate Silver:

The results of the presidential preference poll are nonbinding and serve mostly for vanity – delegates are selected through a separate vote at the caucus sites. Although this is also true in most other Republican caucus states, Maine’s delegate selection process is especially cumbersome and can potentially reward candidates whose supporters are more enthusiastic and who sit through the entire process, which can be hours long.

Mr. Paul’s campaign has predicted that it will win the most delegates from Maine regardless of the result of the straw poll.

Washington County in Eastern Maine had to postpone its caucus because of snow. Their vote will be held next Saturday, February 18.

According to the Bangor Daily News:

A number of communities were not included in that poll because they had not held their caucuses in time. Washington County Republicans postponed their caucuses, originally scheduled for Saturday, Feb. 11, because of a pending snowstorm and will now meet this Saturday. Other communities across the states also have caucuses scheduled for this weekend and later this month.

The omissions were not limited to counties whose votes were delayed:

Nearly all Waldo County towns held caucuses on Feb. 4 but those towns were blank in the results released by the state party. Additionally, Waterville held its caucuses ahead of time but were not included in the results.

Ron Paul’s campaign claims they may be able to catch up once the vote is complete.

Map of election results and schedule of upcoming primaries, caucuses and debates after the jump. 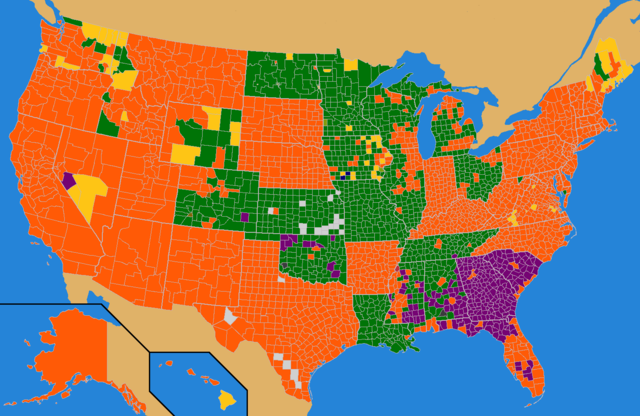