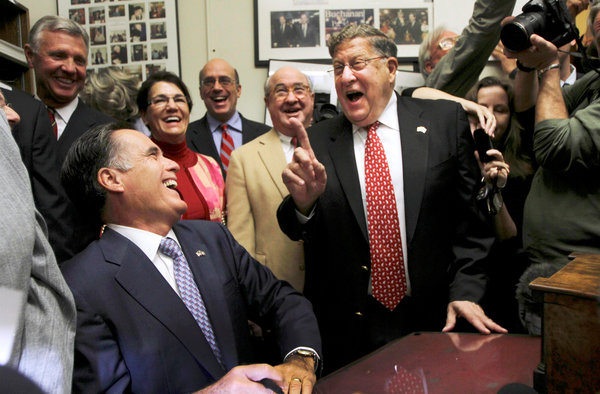 In the end, of course, it’s presidents that make foreign policy. A Romney White House would reflect the personal convictions of Mitt Romney. Whatever those turn out to be.

This is what made primary night television coverage so unsettling: the reminders that we don’t really know what Romney believes, and he may have no intention of telling us until he’s inaugurated.

Of all those reminders, the most chilling was the appearance of former New Hampshire governor John Sununu as a Romney spokesman. For those with long memories, it harkened back to the 1988 election, when Sununu was Republican candidate George H.W. Bush’s national campaign manager.

…  Sununu was also the only one of the 50 governors who refused to sign a 1987 proclamation saluting the 90th anniversary of Zionism and calling on the United Nations to rescind its Zionism-racism resolution. His reasoning was that governors shouldn’t dabble in foreign affairs – though he’d issued proclamations honoring Bastille Day and saluting Polish freedom on Pulaski Day. In 1988 he issued a proclamation honoring the veterans of the U.S.S. Liberty, an American naval vessel mistakenly attacked by Israeli jets in June 1967, causing 34 deaths. Sununu called the attack ‘vicious and unprovoked.’

Bush’s Jewish supporters insisted Sununu’s views didn’t reflect Bush’s. When word came out that Sununu was to be White House chief of staff, they said he wouldn’t be involved in Middle East policy. They said Bush was a devoted friend of Israel. Then we found out he wasn’t.

We hadn’t seen much of Sununu lately, until Romney went and found him. Or they found each other.