You are here: Home / News & Opinion / Agreement Among States to Elect President by National Popular Vote

The National Popular Vote bill would guarantee the Presidency to the candidate who receives the most popular votes in the entire United States. The bill ensures that every vote, in every state, will matter in every presidential election.

The bill has been enacted by the District of Columbiaand 8 states (VT, MD, WA, IL, NJ, MA, CA, HI) shown in green on the map. They total 132 electoral votes bringing us almost halfway towards the 270 necessary to activate the National Popular Vote.

Eleven more states (shown in purple) have passed NPV bills in at least one chamber of their legislature. For example, recently the Republican-controlled New York Senate passed NPV in a 47-13 vote. Republicans supported the bill 21-11 while Democrats supported it 26-2. Across the country, NPV has been endorsed by 2,124 state legislators.

The shortcomings of the current system stem from the winner-take-all rule (i.e., awarding all of a state’s electoral votes to the candidate who receives the most popular votes in each state).

The winner-take-all rule has permitted a candidate to win the Presidency without winning the most popular votes nationwide in 4 of our 56 elections – 1 in 14 times. A shift of 60,000 votes in Ohio in 2004 would have elected Kerry despite Bush’s nationwide lead of 3,000,000. 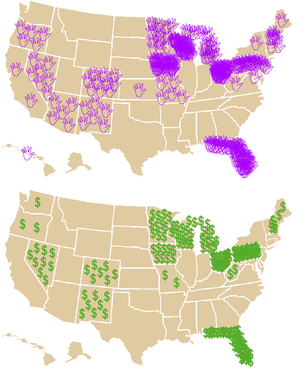 Another shortcoming of the winner-take-all rule is that presidential candidates have no reason to pay attention to the concerns of voters in states where they are comfortably ahead or hopelessly behind. In 2008, candidates concentrated over two-thirds of their campaign visits and ad money in the November general election campaign in just six closely divided “battleground” states — with 98% going to 15 states. This makes two thirds of the states mere spectators. (The maps on the left show a similar situation during the final five weeks of the 2004 Bush-Kerry election. Each purple hand represents a visit from a presidential or vice-presidential candidate and each dollar sign represents $1,000,000 spent on TV advertising.)

The winner-take-all rule treats voters supporting the candidate who comes in second place in a particular state as if they supported the candidate that they voted against.

Article II, Section 1 of the U.S. Constitution gives the states exclusive control over the manner of awarding their electoral votes:

“Each State shall appoint, in such Manner as the Legislature thereof may direct, a Number of Electors….”

The winner-take-all rule is not in the Constitution. It was used by only three states in our nation’s first election in 1789. The current method of electing the President was established by state laws, and that these state laws may be changed at any time.

Under the National Popular Vote bill, all the electoral votes from the enacting states would be awarded to the presidential candidate who receives the most popular votes in all 50 states (and DC). The bill would take effect only when enacted by states possessing a majority of the electoral votes – that is, enough electoral votes to elect a President (270 of 538).

As seen in this state polls are extremely favorable. Supports ranges from a “low” of 67% in Arizona to a high of 83% in Tennessee. On this map, shades of blue represent the highest support and 50/50 support would be represented in purple.

This Spring, Pennsylvania House Bill 1270 was introduced by Rep. Tom C. Creighton (R-Lancaster County) and Senate Bill 1116 was introduced by Senators Alloway, Argall, Boscola, Erickson, Fontana, Leach, Mensch, Solobay, Vance and Waugh. These bills have not yet be acted upon action by the State Government Committees.

Additional information is available in the book Every Vote Equal: A State-Based Plan for Electing the President by National Popular Vote

Two out of three Pennsylvanians believe the President should be the candidate who “gets the most votes in all 50 states”, according to a recent poll conducted by noted Political Science Professor Dr. Terry Madonna.

The strong showing came in Madonna’s March Omnibus Poll involving a telephone survey of more than 800 Pennsylvania residents and voters. Among those interviewed, seven in ten agreed “it would be unjust to have a President who did not receive the most popular votes.”

The survey findings were released by the National Popular Vote Project even as state House and Senate sponsors are garnering additional support for enabling legislation on the matter.

Madonna said polling showed bipartisan public support for the project. “A clear majority of Republicans and Democrats favor popular voting in place of the Electoral College’s current method for choosing the President,” Madonna said. “The fundamental reasons the Founding Fathers created the Electoral College system no longer exist, and the voters of Pennsylvania understand that.”

The prime sponsor of the legislation in the House, Republican state Rep. Tom Creighton of Lancaster County, is quick to point out that his legislation (HB 1270) does not seek to supplant the Electoral College, but rather seeks to direct the electors as provided in the U.S. Constitution.

The Constitution, Creighton notes, spells out in Article II, Section 1, that only the state legislatures may set rules on electors and that, in fact, the term “Electoral College” does not appear in the Constitution.

Only about one in four persons surveyed believe that electing a President by the national popular vote will favor one party over another. And of those who believe that, there is a clear split over which party would be favored.

The Madonna survey included the questions on the presidential election at the request of the National Popular Vote Project, a non-partisan, non-profit organization promoting the issue nationwide. Interviews were conducted with 807 residents, of whom 659 were registered voters, using a random digit telephone number selection system that allowed for the inclusion of cell phone users, in addition to regular landline respondents. The sample error was plus or minus 3.4%.

Results in the survey were similar to those reported in a 2008 automated survey of more than 1,000 Pennsylvania voters conducted by Public Policy Polling. In that poll about 70% favored the election of the President by the national popular vote.