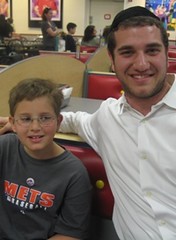 He was twelve years old and the room was filled with well-wishers celebrating his birthday. Shouts of excitement over meeting a friend or seeing a favorite cake being served filled the air of this happy occasion. And then it stopped. Silence. A young man with his wife stood in the doorway. It was him. The guests stopped their conversation in mid-sentence while Marc’s parents rushed to the doorway to greet the new guests. All four cried. Marc stood nearby shyly waiting to be noticed. It was not long in coming. “This is Marc,” his father introduced him and Menashe embraced the young boy in a hug that only a brother could give.

Because he was a brother. A blood brother.

Two years ago, Marc had been diagnosed with a life-threatening disease. Celebrating his twelfth birthday seemed highly unlikely indeed.

More after the jump.
A bone marrow transplant was his only chance and, to be successful, the donor and recipient must match genetically. All members of Marc’s immediate family were tested but none were a match. The oncology clinic, aware that Marc was Jewish, approached Ezer Mizion, the largest Jewish Registry in the world, in the hope that a match would be found among its close to 600,000 potential donors. Menashe was that match. And he happily agreed

Medical staff meetings. Further tests. Waiting. Discussions. More waiting… The decision was finalized. The transplant would take place. Menashe received a phone call from an Ezer Mizion staff member, one of the hundreds of phone calls he had received recently. You see, Menashe had just become engaged. The staff member gulped when she heard the news. “Does this mean that you won’t be…” But Menashe cut her off, “Of course, I’ll still go ahead. Just let me know when. Any day except my wedding day.” Well, it wasn’t on his wedding day, but it was only one week before. Menashe left the world of excitement and the myriad of preparatory tasks and entered the world of a little boy, a boy whom he had never met, a boy who lived halfway across the world from him, a boy who would soon become his blood brother.

Marc’s mother offered Menashe and his wife a slice of cake. “You saved our son’s life.” she said. “There are no words to thank you.”