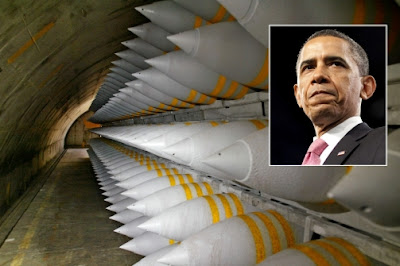 It was reported last night that President Barack Obama covertly authorized an unprecedented amount of aid to the Israeli military, including bunker-busting bombs.

Just a few months after taking office, Obama authorized the delivery of 55 deep-penetrating bombs to Israel, Newsweek will detail in an article appearing on Monday. Israeli and U.S. officials told Newsweek that Israel first requested the ‘GBU-28 Hard Target Penetrators’ in 2005, but the Bush administration did not okay the deal. Then, in 2007, President George W. Bush told Israel he would order the bombs for the country and release them in 2009 or 2010.

Obama delivered the weapons in 2009, the report says. While Israel had developed the capability to make its own deep-penetrating bombs, officials said, the U.S. sale was less expensive.

The article will include additional information on the U.S.’s covert efforts to assist the Israeli military. U.S. Rep. Steve Rothman (D-N.J.) told the magazine that Obama issued ‘orders to the military to ratchet up the cooperation at every level with Israel.’

Weinger reported why the deal was made in secret:

Gen. James Cartwright, former Vice Chairman of the Joint Chiefs of Staff, told Newsweek although U.S. military officials were fine with the sale, they had concerns about ‘how the Iranians would perceive it.’

‘If we say yes, have we somehow given someone a green light without intending to? Whether that green light was an Israeli green light to go do something or whether it was a message to the Iranians, OK these guys aren’t serious about talking, they are starting to arm themselves,’ Cartwright told the magazine.