You are here: Home / Uncategorized / Stealing PA’s Electoral Votes: Have you no sense of decency? 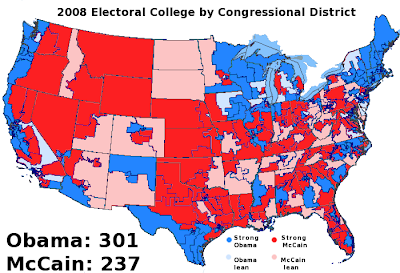 In America, we don’t elect our presidents directly. Each state elects representatives to the “electoral college”, which technically “elects” our president. For the past 224 years, since the first time we elected George Washington President, Pennsylvania has joined virtually every other state in casting all of its electoral votes for the presidential candidate who won the state’s popular vote. This has always made Pennsylvania a critical state in national elections because of the number of electoral votes we deliver.

On September 12, Governor Corbett endorsed changing our system and instead awarding one electoral vote to a presidential candidate for each congressional district they win. It is important to be clear. This is an obscene, transparent, blatantly partisan change in the rules, designed for one purpose only; to help Republican Presidential candidates. Republican leaders are distressed that their candidates have lost Pennsylvania in the past five elections, and they wish to correct this problem, not by fielding better candidates or making more compelling arguments, but by stacking the deck to ensure their nominees receive the majority of Pennsylvania’s electoral votes, regardless of how the people of our state actually vote.

We should be extremely suspicious anytime one political party unilaterally tries to directly affect the outcome of future elections. In this case, the Republicans in Harrisburg want to award electoral votes according to congressional districts. And who is drawing those congressional districts? Harrisburg Republicans! They control the congressional redistricting process completely. So they will essentially be deciding ahead of time just how many votes to guarantee future Republican presidential candidates. In fact, the congressional redistricting now occurring is likely to create 12 solidly Republican districts and 6 Democratic ones. This assures any Republican presidential candidate a clear majority of the state’s electoral votes. This means that your vote in the presidential election will be meaningless.

Not only will our votes as individuals be rendered useless, this plan will also end Pennsylvania’s status as a battleground state and will make us completely irrelevant to presidential campaigns. Why should candidates come here when we will know in advance what the final electoral vote count will be? Presidential candidates will spend far more of their time in states where electoral votes will actually be in play. It is extremely strange and distressing that our governor is pushing a plan that would make Pennsylvania matter less in national politics.

Notice that Republicans who control states that Republican presidential candidates usually win show absolutely no interest in changing their rules. We won’t be seeing this proposal moving in Texas or Mississippi. It is only states that Republicans currently control, but which tend to vote Democratic in national elections which will see the rules of their elections altered. Any change to our electoral college should be adopted uniformly across the nation, with buy-in from both red and blue states so there is no effort to rig future elections.

The Governor gives lip service to improving our electoral system. However, this bill has nothing to do with good government. It is simply a partisan power-grab. If Governor Corbett was really interested in improving Pennsylvania’s electoral structure, he would support bi-partisan proposals such as early voting, no-excuse absentee voting or a national popular vote. But he opposes all of these. Instead, the governor supports this bill, as well as additional legislation which will make it harder for people who disproportionately do not vote Republican to vote at all, such as requiring photo ID every time someone goes to the polls. This will disenfranchise millions of the poor, the elderly, and those who live in cities. In the past, there were times when Democrats have controlled the whole process. They could have passed anything they wished, and when it comes to substantive policy, they often did. But nobody ever attempted to abuse their temporary control to fix future elections. As the prime sponsor of redistricting reform, I find it particularly disheartening that this proposal will make gerrymandering an even more entrenched part of the system. This is extremely disappointing coming from a governor who ran on a promise to reform our political system.

Elections in a democracy are sacred. Permanently changing the rules which were created by our founders and which we’ve all lived by for centuries, in order to benefit your political party is profoundly wrong. It desecrates our history and is a repugnant attack on the very core of our nationhood. The governor’s endorsement of this profanity brings to mind the famous words of Joseph Welch spoken to Senator Joe McCarthy during another attack on the basic structure of our democracy. “Have you no sense of decency?”