You are here: Home / Uncategorized / The Jewish People’s 3000-Year Presence in Palestine

Two of the most malignant lies promulgated about Israel and the Jewish people are the invectives “occupier” and “colonialist.” Separately and in tandem, our enemies use them as weapons to delegitimize us.

But one local man, fed up with the anti-Jewish mythology, has written the verbal equivalent of a sledgehammer to smash these attacks. Author Jerome R. Verlin’s Israel 3000: The Jewish People’s 3000 Year Presence in Palestine is now in its second edition, and Verlin discussed the book‘s key points at a recent Temple Beth Hillel/Beth El Israel Advocacy Group breakfast. 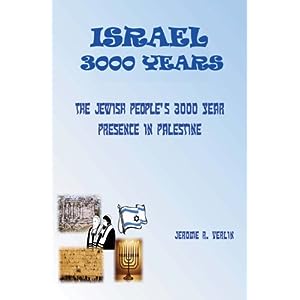 Both Israel’s enemies and those ignorant of the facts claim that Jews have been in the land for a mere 63 years — since David Ben-Gurion read Israel’s Declaration of Independence. Others use 1897 — the year of First Zionist Congress in Basel, Switzerland — as the purported beginning point of the Jewish presence in Eretz Yisrael to depict the Jews as an ersatz indigenous people.

Then there are those who acknowledge that Jews began living in the land more than 3,000 years ago but were exiled and claim Jews were devoid from the area following the Roman conquest.

But Verlin, using historical, archaeological, and other data, plus the conclusions of noted past experts and observations of travelers to the Holy Land, to document that yes, Jews began living in the territory thousands of years ago, and despite the slaughters, name permutations and repeated conquests, Jews have consistently and continuously lived in Israel.

“The truth of the matter is, we didn’t go away,” Verlin noted, after it went from being called Israel and Judea to “Palestine.”

Yet figures from President Jimmy Carter and Mahmoud Abbas to The New York Times ignore all of the evidence, according to Verlin, to erase or weaken the legitimate Jewish claim to the land.

Verlin went through the history of the settlement of the land from the biblical period to today, explaining the many times control of the region changed hands from the Jews, Babylonians, Persians, Jews, Romans, Greeks and Byzantines, various Middle Eastern groups, crusaders, more Arabs and Turks, the British and finally the Jewish People. All along the way he documented that through it all, Jews were the lone constant.

Meanwhile, there is no evidence to support the claims that the land belonged to the Palestinian-Arabs or that the Muslims pre-dated the Jewish presence there. Also, the people who today call themselves “Palestinians” are not related at all to those Middle Eastern peoples who had temporary sway over the region in different periods, Verlin said. Therefore, previous or theoretical land concessions Israel or the Jewish people have made or will be asked to make should never be referred to as “giving back” territory, he stressed.

“Jews” and or “Judea” or “Israel” turn up in artifacts, the Bible, accounts of wars, chronicles of pilgrims and official records and censuses. Verlin offered numerous examples that none but the irrational could dispute in their totality.

Further, since the mid-19th Century, Verlin noted, Jews once again were the majority in our holiest city: Jerusalem.

“We have to make the case to the world,” Verlin stressed, because our adversaries would like public opinion to shift away from the Jews and Israel in favor of the false Arab and Muslim narratives. If most people viewed the Jews as interlopers or a people who have displaced the native “Palestinians,” it would endanger Israel’s very existence and give credence to Arab and Muslim claims that Jews stole “their” land or that Israel was “created” only as a refuge for Holocaust survivors.

“Each of us has to do what each of us can,” said Verlin, to dispel the lies and myths to solidify the Jewish right to the land. “Either we disappear or we stand up for ourselves,” he added, stressing: “We have to be [on the] offensive, not just defensive.”

It might be awkward for Israel’s advocates to walk around with sledgehammers, but Verlin’s paperback will go a long way in countering the libels and slanders that we are the new kids on the Middle Eastern block.