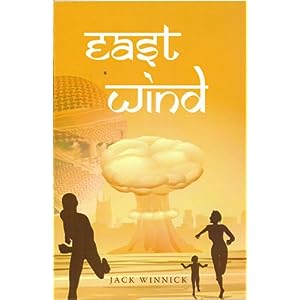 In the genre of international spy thrillers from Daniel Silva and Vince Flynn, Jack Winnick’s East Wind is a fast-paced, page-turner novel involving a credible scenario: Muslim terrorists have penetrated the United States, detonated one small nuclear dirty bomb in a major U.S. city and are threatening further attacks if the U.S. does not cease its support for Israel. Mr. Winnick knows of what he speaks: he has an interesting resume as an engineering professor with 40 years expertise in chemical and nuclear engineering, the author of a popular textbook in thermodynamics, a consultant for oil and gas industry and NASA, and he is a professional actor. He dedicates the book to the many thousands of intelligence officers “who toil anonymously, day and night, to defend the free world from those who would destroy it.” The protagonists are a team consisting of a young female FBI agent from America’s heartland, Lara, a computer whiz who has been able to coordinate the security services’ clumsy efforts to successfully track Islamists, and Uri, a daring, accomplished Mossad field agent on loan from Israel. The climax of the book is their race to thwart the next attack by these unknown terrorists. Along the way, Mr. Winnick introduces many characters from across the spectrum of the intelligence services, Arab and Muslim students, agents, and terrorists, and gives each a credible voice for their own causes. It is his fluid ability to describe nuclear thermodynamics, the makings of a bomb, and the ability of those who want us to “succumb to the forces of darkness” which allows this scenario to be utterly believable.